Three players tally 16 points each to lead Providence over Stonehill 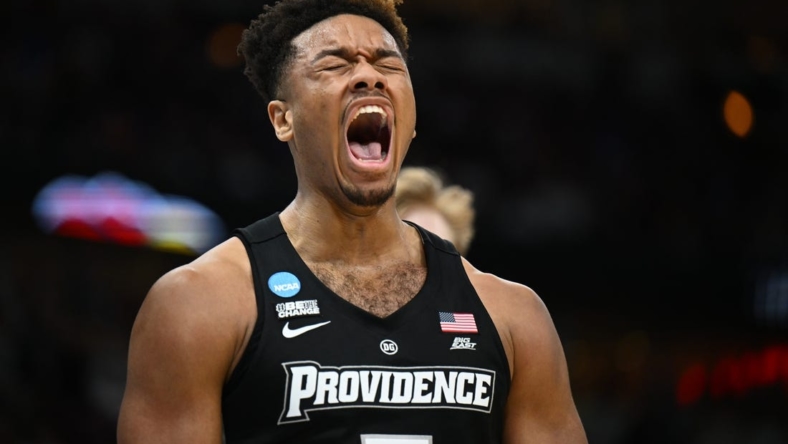 Ed Croswell collected 16 points and nine rebounds and Bryce Hopkins and Clifton Moore each added 16 points and eight rebounds to lift host Providence to a 100-76 victory over Stonehill on Tuesday.

Croswell made 8 of 14 shots from the floor and recorded eight of the 16 offensive boards for the Friars (3-0), who held a decisive 40-19 advantage on the glass.

The victory likely was especially sweet for Providence coach Ed Cooley, a Stonehill graduate in 1994 and three-time captain. He was inducted into the Stonehill Athletic Hall of Fame in 2019.

Stonehill’s Shamir Johnson sank five 3-pointers to finish with 15 points. Max Zegarowski added three shots from beyond the arc to highlight his 14-point performance for the Skyhawks (1-3), who have lost two games to Big East foes this season. Stonehill dropped an 85-54 decision to UConn on Nov. 7.

Providence benefited from a substantial size advantage to have its way on the interior. Carter and Croswell each slammed home a dunk before Moore made a layup to cap an 11-2 run and give the Friars a 27-11 advantage.

Providence kept its foot on the gas as Hopkins converted a three-point play to extend its lead to 35-16 with 7:14 to play in the first half.

The Skyhawks, however, chipped away and benefited from Johnson’s buzzer-beating 3-pointer to trim their advantage to 47-36 at halftime.

The Friars, however, continued to exploit in the interior before Jayden Pierre’s off-foot layup to extend their lead to 72-47 with 11:37 remaining in the second half.

Providence was not seriously challenged the rest of the way.