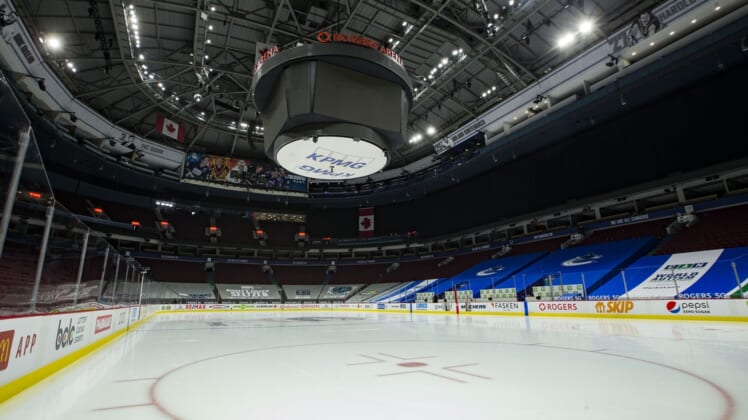 Mar 31, 2021; Vancouver, British Columbia, CAN; A general view of an empty Rogers Arena after the game between the Calgary Flames and Vancouver Canucks scheduled for Wednesday was postponed due to COVID-19. Mandatory Credit: Bob Frid-USA TODAY Sports

Three more Vancouver Canucks games were postponed by the NHL on Thursday due to COVID-19 protocol issues, the league announced.

Vancouver’s game on Wednesday against the Calgary Flames was postponed less than two hours before the scheduled start. The latest Canucks’ games to be postponed are Saturday’s game at the Edmonton Oilers and road contests against the Winnipeg Jets on Sunday and Tuesday.

Vancouver’s next scheduled game is April 8 at Calgary. The Canucks are prohibited from practicing until Tuesday, according to the NHL.

“The decision was made by the League’s, NHLPA’s and Club’s medical groups,” the NHL said. “The Canucks’ organization has, and will continue to follow, all recommended guidelines aimed at protecting the health and safety of its Players, staff and community at large as set by the NHL, local, provincial and federal agencies.”

Vancouver forward Adam Gaudette and a member of the coaching staff were placed in COVID-19 protocol earlier this week. Canucks coach Travis Green confirmed on Tuesday that Gaudette tested positive for COVID-19.

Defenseman Travis Hamonic was placed on the list Thursday. It wasn’t immediately known if he tested positive.