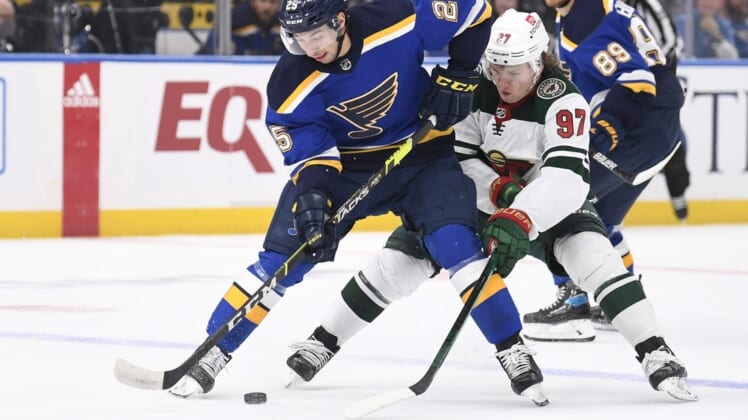 Three more NHL players who were members of the Canadian World Junior team at the time of an alleged sexual assault in 2018 released statements on Tuesday denying any involvement in the incident.

St. Louis Blues players Jordan Kyrou and Robert Thomas and Chicago Blackhawks forward Taylor Raddysh each issued statements via Twitter, with varying degrees of denial of their involvement and awareness of the incident that allegedly took place in London, Ont., in June 2018.

Raddysh, 24, stated he became aware of the alleged assault in 2019.

“At that time, I cooperated fully with the initial Hockey Canada investigation,” Raddysh said. “I was not in any way involved with the alleged incident.”

Kyrou and Thomas did not directly address whether they knew about the incident before it became public. Both denied being involved or witnessing the alleged assault.

Kyrou, 24, claims he was not in London, Ont., at the time the incident allegedly took place.

“I want to clearly state I did not attend the Hockey Canada Gala and was not in London, Ontario, at the time of the alleged incident,” he said through a statement posted on Twitter.

Thomas, 23, also denied involvement in a statement posted to Twitter.

“It is important for me to share with you my response to these allegations,” he wrote. “I had no involvement in, nor did I witness, the alleged incident.”

All three players said they will continue to cooperate in any further investigations.

The allegation became public knowledge in May after Hockey Canada settled a lawsuit with a woman who said she was sexually assaulted by eight Canadian Hockey League players, including members of the 2018 World Junior team, in London, Ont., in June 2018.

After a public outcry expressing anger and disappointment in how the allegations were handled, Hockey Canada announced last Thursday that it would reopen the investigation in the alleged assault.

The statements Tuesday follow several others from members of the 2018 World Junior team, including Arizona Coyotes defenseman Conor Timmins and San Jose Sharks forward Jonah Gadjovich, who also denied involvement in the incident.