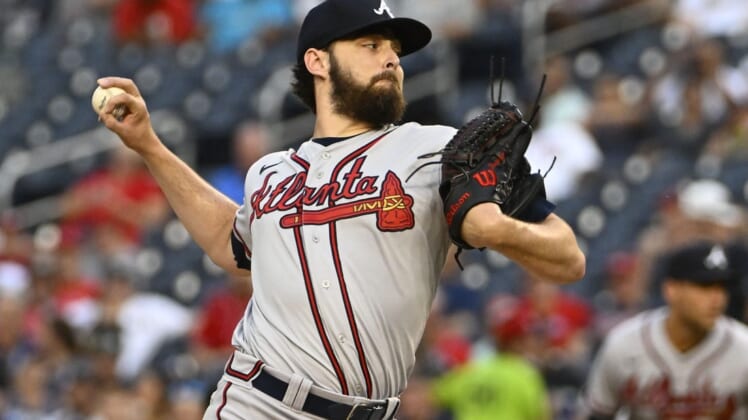 Austin Riley, Orlando Arcia and Adam Duvall all homered as the Atlanta Braves defeated the Washington Nationals 8-4 on Friday night.

Matt Olson added three RBI-singles for the Braves, who won their eighth straight game against the Nationals.

Starter Ian Anderson (8-5) allowed one run on five hits and three walks in 5 1/3 innings. He struck out five.

Josh Bell had three hits for the Nationals, who have lost eight straight and 14 of 15. They own the worst record in baseball (30-62) with two games remaining before the All-Star break.

Juan Soto of the Nationals was held hitless, but extended his on-base streak to 23 games with three walks.

The Nationals closed the gap with a three-run ninth. Runs scored on Victor Robles’ RBI single and Juan Soto’s bases-loaded walk against Will Smith. A.J. Minter came on to face Ehire Adrianza, allowed a run on a wild pitch and walked Adrianza before striking out Keibert Ruiz for his fifth save.

The Braves jumped on Corbin for three in the first. With one out, Dansby Swanson reached on a throwing error by Luis Garcia. Olson singled home Swanson, ending a streak of four games in which Atlanta scored all its runs via homers.

Riley then smacked a 2-1 pitch to left-center field for his 26th homer of the season and the Braves led 3-0.

Arcia singled leading off the second inning and later scored on a single by Olson to make it 4-0.

Ronald Acuna, Jr. singled with one out in the fourth and stole second. After Swanson walked, Olson struck again, sending a ground ball up the middle to score Acuna.

The Braves made it 6-0 in the fifth when Arcia homered to center.

Washington loaded the bases against Anderson with one out in the sixth. Collin McHugh replaced Anderson, picked up an out, but hit Cesar Hernandez with a pitch to force in a run.

Atlanta got the run back when Duvall doubled and scored on single by William Contreras in the seventh, and Duvall homered in the ninth.