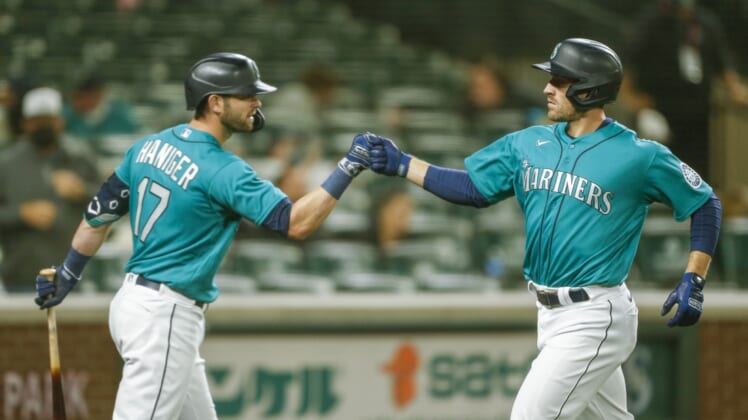 Shohei Ohtani homered for the Angels in the opener of a three-game series. It was his eighth of the season, one below the major-league-leading total of the Boston Red Sox’s J.D. Martinez.

Mariners right-hander Chris Flexen didn’t stick around long enough to get the victory. He allowed three runs on four hits in four innings, with one walk and no strikeouts.

Drew Steckenrider (2-1) struck out three in two perfect innings for the win. Casey Sadler and Anthony Misiewicz each pitched hitless innings before Rafael Montero gave up a run on two hits in the ninth.

The Angels scored twice in the top of the first. David Fletcher led off with a single, moved to second on Mike Trout’s one-out single and scored on Anthony Rendon’s double to center. Jared Walsh brought home Trout with a sacrifice fly.

Haniger led off the bottom of the inning with a home run, and Moore did the same in the second to tie the score at 2-2.

The Angels regained the lead in the third on Ohtani’s one-out homer to right field.

The Mariners tied it in the bottom of the inning as Ty France and Kyle Seager began the frame with walks. With out outs, Moore lined a run-scoring single to right field.

Murphy’s solo shot with one out in the fourth gave the Mariners their first lead, 4-3.

Seattle added a run in the sixth as Moore led off with a walk, advanced to second on a wild pitch, stole third and scored on catcher Kurt Suzuki’s throwing error.

The Mariners scored twice in the eighth. Sam Haggerty reached on a fielding error by shortstop Jose Iglesias, and he stole second. J.P. Crawford and Murphy followed with run-scoring doubles.

The Angels scored the game’s final run in the ninth as Trout led off with a double, moved to third on a groundout and scored on Walsh’s single to center.