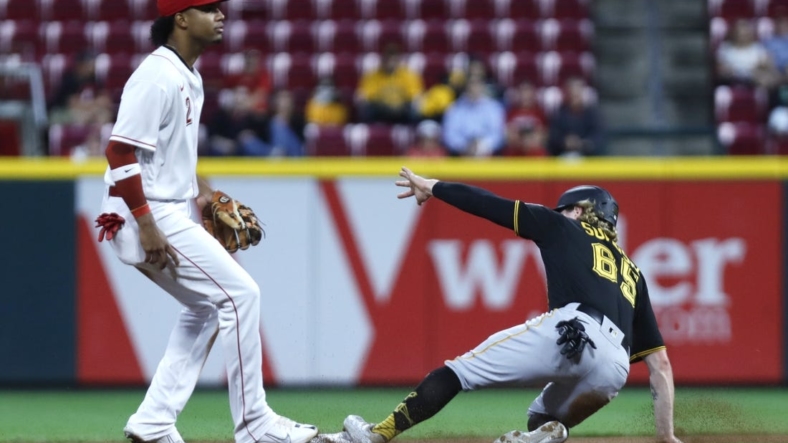 Home runs from Bryan Reynolds, Rodolfo Castro and Diego Castillo led the visiting Pittsburgh Pirates to a 6-3 win over the Cincinnati Reds on Monday in the opener of a four-game series.

Reynolds opened the scoring with a solo shot in the first inning. Aristides Aquino responded with a two-run blast for the Reds in the fourth before Pittsburgh regained the lead for good in the fifth when Castro socked a three-run homer and Castillo hit a two-run shot.

Reynolds and Ke’Bryan Hayes each had two hits for the Pirates (52-88), who had lost eight of their previous 10 games.

Bryse Wilson (3-8) earned the win after throwing 5 2/3 innings of three-run ball. He struck out four and walked two. Robert Stevenson followed with 1 1/3 scoreless innings, and Wil Crowe tossed two shutout frames for his fourth save.

Aquino finished with two hits and Alejo Lopez had an RBI single in the sixth for the Reds (56-83), who took their third consecutive loss.

Reynolds belted his 22nd home run of the season with one out in the first. He connected on a first-pitch fastball from Minor.

In the Cincinnati fourth, Spencer Steer hit a leadoff single. Two outs later, with Steer on second, Aquino went deep to left for his eighth of the year.

The Pirates came back in the fifth after Kevin Newman and Reynolds opened the inning with singles. Castro’s eighth long ball of the year went to left. Hayes reached on an error by second baseman Lopez, stole second and third, then strolled home on Castillo’s 11th homer, to left.

A single and two walks loaded the bases for Lopez with two outs in the sixth, and his RBI single brought home TJ Friedl and knocked Wilson from the game. Stephenson entered and retired Nick Senzel on a lineout to center, leaving three on base and preserving Pittsburgh’s 6-3 lead.