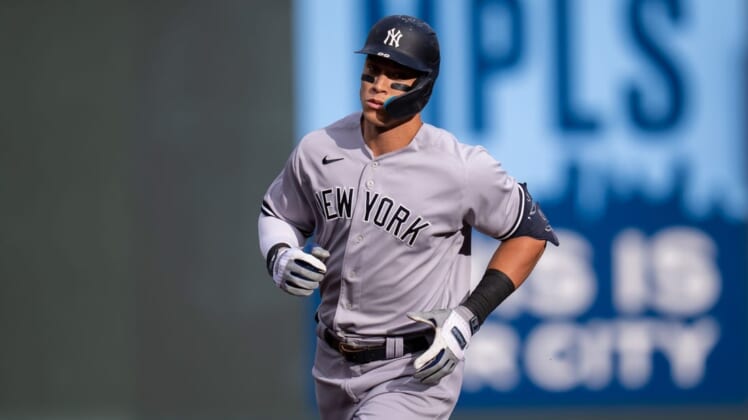 Aaron Judge, Giancarlo Stanton and Anthony Rizzo each homered, and the New York Yankees pulled away for a 10-4 win over the Minnesota Twins on Tuesday night in Minneapolis.

D.J. LeMahieu, Jose Trevino and Joey Gallo added one RBI apiece for the Yankees, who won their seventh in a row. The Yankees have outscored opponents 48-11 during their win streak.

Jorge Polanco finished 4-for-5 with a double, homer and two RBIs to lead the Twins at the plate.

Yankees left-hander Lucas Luetge (2-2) earned the win with 1 2/3 innings of scoreless relief. Luetge replaced starter Jameson Taillon, who gave up four runs on nine hits in four innings. He struck out three and walked one.

Twins right-hander Cole Sands (0-2) was battered in his second career start. He surrendered four runs on eight hits in 3 2/3 innings. He walked two and struck out three.

New York wasted little time grabbing a 3-0 lead in the top of the first. Judge crushed a 431-foot, two-run shot to center field for his 22nd homer, which leads the majors. Stanton followed two batters later with a solo shot, his 12th, which traveled 445 feet to left field.

The Twins cut the deficit to 3-1 in the bottom of the first on a sacrifice fly by Max Kepler.

In the third, Minnesota pulled within 3-2. Polanco hit a double to deep right field to drive in Luis Arraez, who had reached on a one-out single.

Judge picked up his third RBI on a single to left field in the fourth, driving in Gallo.

The Twins once again inched within one run of the lead in the bottom of the frame. Jermaine Palacios hit a sacrifice fly to center to score Gio Urshela.

New York made it 5-3 when LeMahieu drew a bases-loaded walk in the fifth.

Polanco hit a leadoff homer in the bottom of the fifth to trim the Yankees’ lead to 5-4.

Rizzo delivered a three-run homer in the seventh to give the Yankees an 8-4 advantage. LeMahieu had singled and advanced to second base on a wild pitch, Judge drew an intentional walk and Rizzo capitalized on a 3-1 pitch by pulling it 410 feet for his 14th homer.

Trevino and Gallo each added RBI singles in the eighth to make it a six-run game.