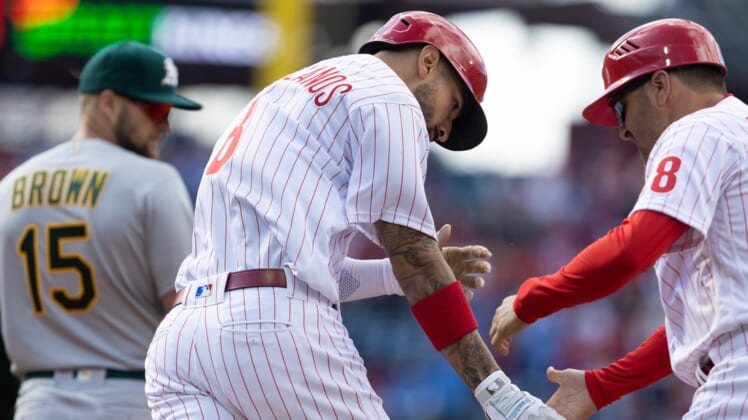 Acquired last season at the trade deadline from the Texas Rangers, Gibson (1-0) struck out 10 and pitched with a lead in every inning after the first.

The Phillies went up for good with two outs in the opening inning when Oakland starter Cole Irvin (0-1) hit Bryce Harper with two outs and Castellanos followed with a two-run homer to center field.

Irvin, who began his career with the Phillies, rebounded to match zeroes with Gibson until the last of the sixth, when Hoskins and Segura led off the inning with back-to-back solo shots in a span of three pitches.

The homers were the first of the year for all three Phillies.

Irvin was pulled one batter after the Segura homer and charged with four runs on seven hits in 5 1/3 innings. He walked one and struck out four.

Gibson served up a one-out single to Jed Lowrie in the first and a leadoff single to Stephen Piscotty leading off the sixth. In between, he retired all 14 batters he faced, striking out eight of them.

He was pulled with a shutout after throwing 82 pitches following an abbreviated spring training. He did not walk a batter.

The A’s got on the board against reliever Jose Alvarado in the eighth when Piscotty had an RBI single to score Elvis Andrus, who doubled.

Down 4-1, Oakland made things interesting in the ninth when Tony Kemp drew a leadoff walk from Corey Knebel, advanced on a passed ball, and scored on a single by Lowrie.

Facing the potential tying run with no one out, Knebel then got Sean Murphy to ground into a double play and wrapped up his first save by striking out Chad Pinder, who had a home run in the opener Friday.

Hoskins, Segura and Alec Bohm had two hits apiece for the Phillies, who also won the opener, 9-5.

With two hits each, Lowrie and Piscotty combined for four of Oakland’s five hits.