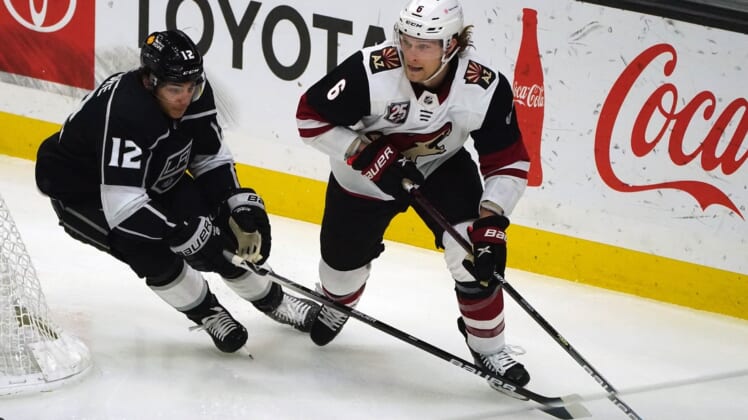 Drew Doughty assisted on the tying and winning goals to help the Los Angeles Kings rally for a 4-3 win against the visiting Arizona Coyotes on Wednesday night.

The Kings entered the third period trailing 3-1, but they took the lead when Carl Grundstrom tipped in a shot from Doughty with 6:05 left.

Arizona’s Lawson Crouse had a goal and an assist, Ilya Lyubushkin and Johan Larsson also scored, and Jakob Chychrun and Christian Fischer each had two assist. Adin Hill made 26 saves in his eighth straight start for the Coyotes, who fell short in a bid for their first four-game winning streak of the season.

Kempe and Carter scored in the first five minutes of the third period to tie the score 3-3.

At 9:30 of the first period, Crouse pushed in a loose puck following a save by Quick to give Arizona a 1-0 lead.

Crouse earned the assist on the second goal when his point shot went wide but kicked off the end boards and out to Lyubushkin, who squeezed it past Quick on the near side for a 2-0 lead at 14:44 of the first period.

The Kings cut the deficit to 2-1 at 17:21 of the first. Anderson-Dolan chipped in the puck from the bottom of the left circle after Hill lost sight of the puck.

Larsson redirected a shot from Chychrun to extend the lead to 3-1 at 5:55 of the second period. Chychrun has seven points (three goals, four assists) in the past three games.

Anze Kopitar appeared in his 1,111th game with the Kings, tying Dave Taylor for second on the all-time franchise list. Dustin Brown tops the list, having appeared in game No. 1,219 for Los Angeles on Wednesday.