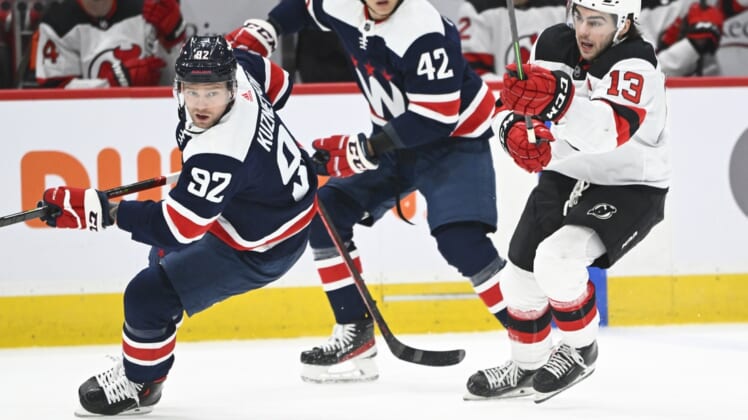 Connor McMichael, Nicklas Backstrom and Alex Ovechkin scored in the third period Saturday night for the host Washington Capitals, who overcame a pair of one-goal deficits to beat the New Jersey Devils 4-3.

Tom Wilson scored in the second period for the Capitals, who won for the ninth time in 12 games (9-2-1) and are one point behind Toronto in the race for the Eastern Conference’s first wild card. Washington is also within three points of the third-place New York Rangers in the Metropolitan Division.

After a scoreless first period, the teams traded goals that were generated off turnovers in a span of fewer than two minutes early in the second.

Dawson Mercer picked off the Capitals’ Axel Jonsson-Fjallby in the neutral zone to begin a sequence that ended with Hughes’ goal 55 seconds into the period. John Carlson then intercepted a drop pass by Ty Smith to set up Wilson’s goal just 1:52 later.

The puck bounced to Ryan Graves, who passed across the ice to Severson, who then deked Anthony Mantha before moving to the high slot. Severson’s sizzler at 7:17 went past Vanecek, who was screened by teammate T.J. Oshie as well as teammate Justin Schultz, who was tussling for position with Jimmy Vesey next to him.

The Capitals tied the score when Schultz, to the left of Daws, went to one knee and passed across the crease to McMichael, who flicked the puck into the wide-open corner of the net 2:08 into the third period.

Backstrom scored the go-ahead goal with 13:04 left following a chaotic sequence deep in the Devils’ zone. With New Jersey trying to get a clear, Mantha jabbed at the puck, which bounced off Backstrom’s skate before he collected it and sent a shot beyond Daws’ glove.

Oveckin scored what proved to be the game-winner on the power play with 8:12 remaining, when he took a no-look pass from Evgeny Kuznetsov and beat Daws from near the goal line.

With Daws pulled for the extra attacker, Bratt scored off a rebound with 31.9 seconds left.