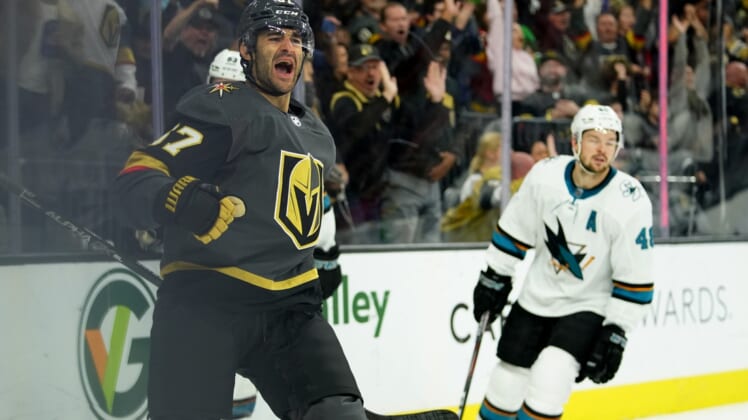 Thomas Bordeleau scored in the third round of the shootout after Timo Meier scored the tying goal with 0.9 seconds remaining in regulation and the San Jose Sharks rallied to hand the Vegas Golden Knights a 5-4 loss on Sunday night in Las Vegas.

The 20-year-old Bordeleau, playing just his fifth NHL game after starring for a University of Michigan team that advanced to the Frozen Four, deked Vegas’ Logan Thompson and then beat him with a backhand shot on his blocker side to win it.

Nick Bonino had his first two-goal game of the season and Tomas Hertl also scored goals for San Jose (32-35-12, 76 points), which snapped an eight-game road losing streak as well as an 11-game regular-season losing streak to the Golden Knights.

Max Pacioretty and Nicolas Roy each had a goal and an assist, Chandler Stephenson and William Carrier scored a goal apiece and Shea Theodore added two assists for Vegas (42-31-6, 90 points) which closed to within three points of the idle Dallas Stars (44-30-5, 93 points) for the final wild-card spot in the Western Conference.

San Jose, playing the second game of a back-to-back that began with a 4-1 home victory over Chicago on Saturday night, took a 1-0 lead at the 11:43 mark of the first period when Hertl backhanded in a rebound of an Alexander Barabanov shot for his 30th goal of the season.

Vegas tied it less than two minutes later when Stephenson knocked in a rebound of a Pacioretty shot for his 20th goal of the season.

The Golden Knights then built a 3-1 lead in the second period with two goals in the span of 2:13.

Pacioretty scored the first when he rushed down the right side and around Nicolas Meloche to fire a forehand shot over Reimer’s left shoulder for his 17th goal of the season. Carrier followed with his eighth goal of the season, one-timing a backhand pass from behind the goal by Keegan Kolesar.

San Jose cut it to 3-2 with 1:05 left in the period when Bonino redirected Megna’s shot from the right point past Thompson.

Roy made it 4-2 at the 6:35 mark of the third period when he one-timed a William Karlsson pass from the bottom of the right circle over Reimer’s left shoulder for his 15th goal of the season.

Bonino cut it to 4-3 with 2:06 remaining in regulation when he fired a shot from the left point that went through traffic and past Thompson’s blocker side for his 15th goal of the season and seventh in the past 12 games.

Meier then tied it in the last second with his 35th goal of the season when he fired in a rebound of Brent Burns point shot that bounced off the back wall to Meier alone by the left side of the goal.

Robin Lehner, who hadn’t practiced for three days and according to reports by both ESPN and The Athletic was expected to undergo season-ending knee surgery, suited up and was Thompson’s backup.