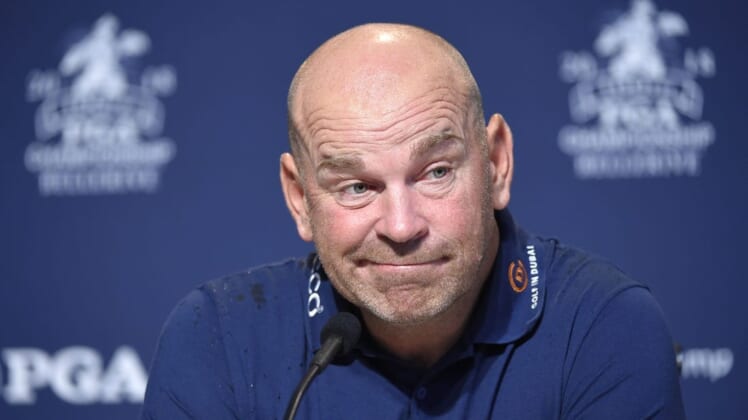 Thomas Bjorn is the odds-on favorite to lead Team Europe in next year’s Ryder Cup after Henrik Stenson was stripped of the captaincy Wednesday.

Bjorn captained Team Europe to its most recent victory in the event in 2018 and has been highly critical of players bolting for the rebel LIV Golf tour. He was installed as the 2-5 favorite by SportsBetting.ag to replace Stenson as the captain in 2023.

The next shortest odds belong to Luke Donald at 5-1 and no one else has better than Eduardo Molinari’s 12-1 odds.

World No. 3 Rory McIlroy has been a popular topic on social media as a potential playing captain, but the sportsbook installed the longest odds on him among the 13 players offered at 70-1.

According to its press release Wednesday, Team Europe plans to announce a new captain “in due course.”

Bjorn was a popular choice as captain in 2018 and went on to lead Team Europe to a resounding upset against Team USA in Paris.

He has also been at the forefront of criticism lobbied at players who have defected to the Saudi Arabian-backed tour, which he said has engaged in “sportswashing” while trying to minimize the Saudi government’s history of human rights abuses.

“When (Bjorn) told us: ‘We don’t love any of you and all players say so.’ … I already have an age and had enough suffering to be enduring nonsense like that,” Sergio Garcia said at last week’s The Open Championship while adding that he plans to leave the DP World Tour. “That’s not pretty.

“It is very sad to receive such treatment for a personal and professional decision. … I feel sorry for the Ryder Cup.”

Donald is a former world No. 1 who has also emerged as a leading candidate. The 44-year-old Englishman is a Ryder Cup who served as a vice-captain under Bjorn in 2018.