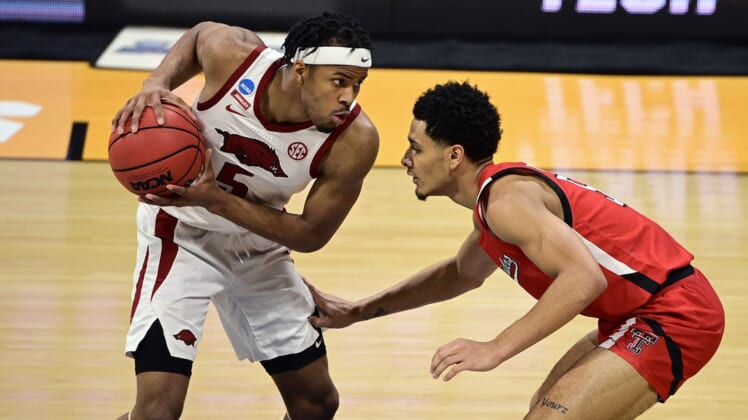 Justin Smith scored 20 points and made a game-saving defensive play at the end as third-seeded Arkansas held off sixth-seeded Texas Tech 68-66 in the second round of the NCAA Tournament South Region on Sunday in Indianapolis.

Davonte Davis and Moses Moody added 15 points each and Jalen Tate had 10 as the Razorbacks (24-6) advanced to meet the Florida-Oral Roberts winner in the Sweet Sixteen.

Smith had three baskets to lead a 13-4 run to start the second half, giving Arkansas a 46-35 lead.

Texas Tech pulled within eight points three times before Davis had two baskets that helped the Razorbacks take a 56-43 lead.

Edwards made consecutive 3-pointers to start an 11-0 run that got the Red Raiders within 56-54.

Moody’s jumper ended Arkansas’ drought and he added a 3-pointer as the Razorbacks extended their lead to 65-57 with 3:55 left.

Chibuzo Agbo made a 3-pointer and McCullar had a three-point play as Texas Tech got within 65-63.

Smith answered with a dunk before the Red Raiders made three free throws to get within one point.

Texas Tech missed chances to tie when Mac McClung, an 80 percent foul shooter, missed the front end of a one-and-one and Shannon missed a layup.

JD Notae’s free throw pushed the lead to two and that was enough when Smith defended Edwards’ missed layup with three seconds left.

Smith converted a three-point play for the first points of this game and the Razorbacks held a 7-6 lead before Texas Tech heated up.

McClung, McCullar and Shannon each made a 3-pointer during a 17-6 run that gave the Red Raiders a 23-13 lead.

Notae made back-to-back 3-pointers to start a 14-4 run and the score was tied three times before Smith’s layup gave Arkansas a 33-31 halftime lead.