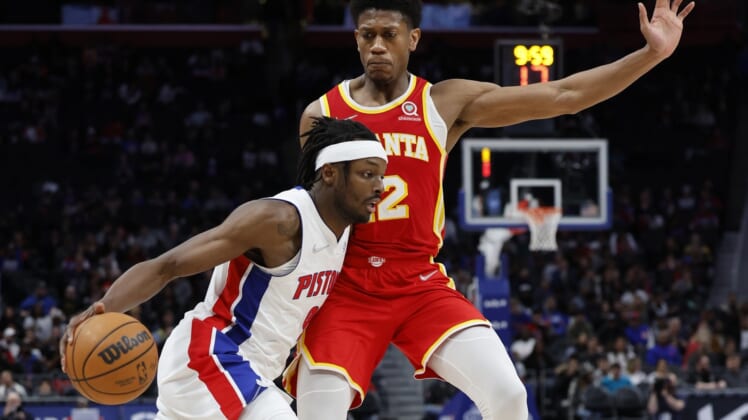 Jerami Grant had 21 points, eight rebounds and four assists and the host Detroit Pistons scored 23 unanswered points in the third quarter while rolling to a 122-101 win over the Atlanta Hawks on Wednesday.

Saddiq Bey made three 3-pointers to give him 192 on the season, a new Pistons single-season mark. Bey finished with 10 points.

Grant reached the 14-point mark by halftime and Olynyk contributed 10 off the bench as Detroit took a 59-51 halftime lead. Young kept his team within striking distance by scoring 14 points and dishing out six assists.

Leading 61-55 early in the second half, Detroit suddenly took a commanding lead with its 23-point outburst.

Cunningham got it started with a left-handed layup, followed by a right-handed finger roll. Bey hit a 3-pointer and Cory Joseph (11 points) then heated up. He contributed a three-point play, a 3-pointer, a technical foul free throw and a layup during the run. Grant was also a major factor, supplying seven points and two assists.

A field goal by Bogdanovic finally ended the Hawks’ drought with 4:48 left in the quarter. That began a 23-9 Atlanta run to finish the quarter and cut Detroit’s advantage to 15. Delon Wright knocked down a pair of 3-pointers during that span and Bogdanovic scored the final points of the third with another 3-pointer.

The Pistons opened the fourth quarter with an 8-2 spurt that included five Cunningham points for a 101-80 lead. The Hawks never got within 18 points the rest of the way.