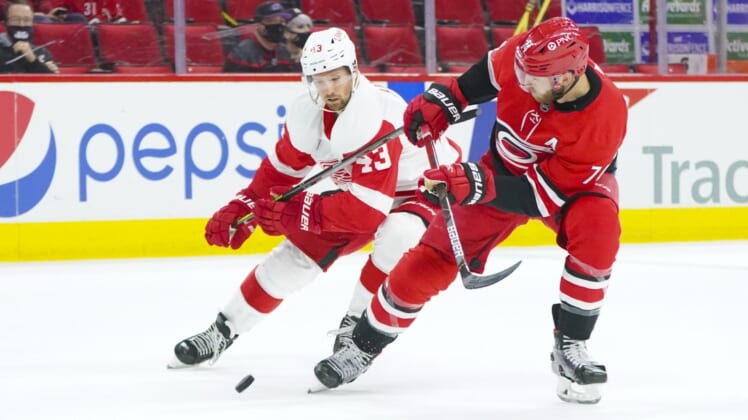 Adam Erne and Filip Zadina scored goals early in the third period and the Detroit Red Wings held on to defeat the Carolina Hurricanes 3-1 on Monday night in Raleigh, N.C.

Red Wings goalie Jonathan Bernier, who made 37 saves, came less than seven minutes away from his first shutout of the season.

Erne, who produced the tying goal late in the third period two nights earlier at Carolina and then scored the decisive shootout tally later in that game, posted his 11th goal of the season 24 seconds into the third period Monday. Erne has five goals in the past seven games.

The Hurricanes made it interesting thanks to Nino Niederreiter’s goal with 6:06 remaining.

Goalie James Reimer saw his first game action in more than a week for Carolina, which is trying to keep three goalies sharp. He made 27 saves.

The Hurricanes entered last weekend with the best record in the NHL. Then they dropped the Saturday night game to the Red Wings in a shootout before their latest setback.

Carolina is 3-2-1 on a eight-game homestand that wraps up later with games against the Nashville Predators on Thursday and Saturday.

There was no scoring through two periods, with the Hurricanes putting 24 shots on net and the Red Wings delivering 20 shots. Each club was 0-for-2 on power plays through those first 40 minutes.

Carolina captain Jordan Staal appeared in his 1,000th NHL game. He was the first player to be in game No. 1,000 while playing for the franchise since Ray Whitney reached that milestone in October 2009. Staal assisted on the team’s lone goal.

Both teams had some roster adjustments. The Red Wings were without right winger Anthony Mantha, who was traded to the Washington Capitals on Monday. A day earlier, Detroit dealt defenseman Jon Merrill to the Montreal Canadiens.

On Monday, the Hurricanes sent defenseman Haydn Fleury to the Anaheim Ducks in exchange for defenseman Jani Hakanpaa.