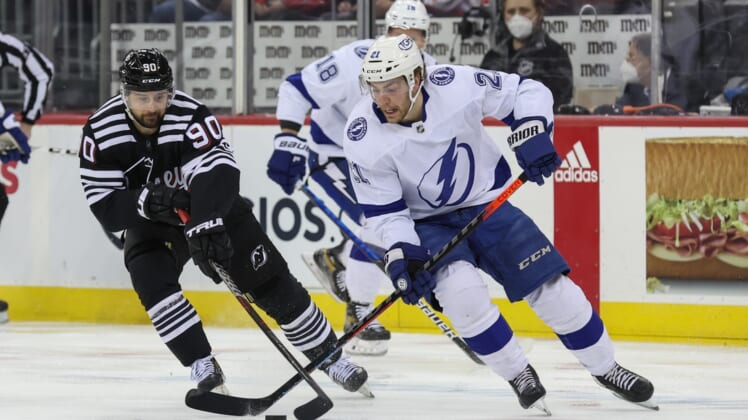 Tampa Bay’s Victor Hedman scored the go-ahead goal in the third period as the Lightning scored five unanswered goals against New Jersey on Tuesday night, beating the Devils 6-3 in Newark, N.J., to win the season series.

Trailing 3-1 in the second, Tampa Bay scored twice to end the period, then added three goals in the final period to win its second straight game and improve to 11-3-1 in the past 15 matches.

New Jersey rookie Dawson Mercer recorded a tally off a Lightning own-goal and posted two assists for a career-high three points, and Yegor Sharangovich and Jack Hughes each tallied and had a helper as the Devils fell to 2-9-0 in their past 11 games.

Goalie Jon Gillies surrendered six goals on 30 shots before leaving after Bellemare’s goal in the middle of the third. Nico Daws made two saves in relief.

The final regular-season meeting opened with a bizarre goal to give the home side a 1-0 lead at 8:27 of the first period.

Lightning defenseman Erik Cernak — in the lineup after missing nine games with a lower-body injury — backchecked toward Vasilevskiy, with the puck on his stick and apparently headed behind the goal.

But Hughes reached in and banged his blade against Cernak’s, sending the puck into the net. Mercer — the last Devils player to touch the puck — was credited with his 11th goal.

Only 38 seconds later, Maroon evened the match at 1 when he found a rebound out front of Gillies and potted his eighth goal.

On New Jersey’s first power play, Hedman committed a turnover in the defensive end. Sharangovich sniped in his 10th tally from close range with 56 seconds left for a 2-1 lead.

Inside the first two minutes of the second frame, Hughes got on the score sheet when he took his own rebound after a steal of defenseman Cal Foote and backhanded home his 14th goal for a 3-1 lead.

Stamkos and Killorn scored 41 seconds apart late in the period for a 3-3 tie.

Hedman, Kucherov and Bellemare found the net in the third in a span of a little over three minutes as the Lightning pulled away.