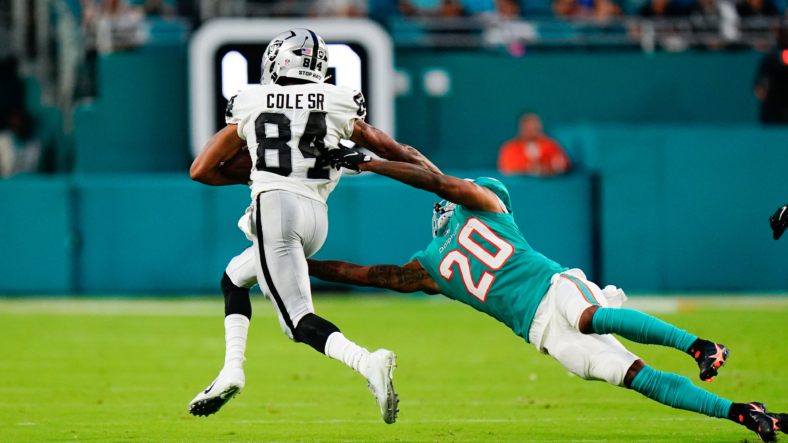 The Las Vegas Raiders are finally reaching the conclusion of training camp with their fourth and final preseason game on Friday inside Allegiant Stadium at 5:15 p.m. PT against the New England Patriots.

This week, Raiders’ first-year coach Josh McDaniels and his team have been going up against his former boss in Patriots head coach Bill Belichick with joint practices on Monday and Tuesday.

Most of the time when it comes to joint practice, it can either go really well, and both sides get the most work in, or things go sideways, and tempers begin to flare.

With a lot of old faces going up against one another, both from the players and coaching side, the two joint practices have actually gone as smoothly as projected.

“I thought it was two teams that had the right idea about how to go about this and really get the most out of it,” McDaniels said to the media Wednesday morning. “We had a lot of film (Tuesday) to go through. We spent three hours talking about what we learned.

“And that’s really the benefit of these. You can control it so you avoid the piles and I thought both teams practiced exactly the way you’d want to practice in a joint endeavor.”

Now, the two teams will get some game action in to end the preseason as teams have to cut rosters down from 80 to 53 on Tuesday.

Here are five important things to watch for the Raiders.

1. Raiders have to decide on two or three quarterbacks for 53-man roster

We are at the point of the preseason where the final roster spots are up for grabs.

With the news of the Las Vegas Raiders trading Nick Mullens to Minnesota, it means that Jarrett Stidham won the backup quarterback job to support the starter, Derek Carr.

Not only does that mean Stidham won the job, but it also means undrafted rookie Chase Garbers has the opportunity to possibly make the 53-man roster, if not the practice squad for sure.

On Friday, if Carr does not get any snaps in, Garbers is expected to get a good number of plays under center, along with Stidham. Garbers has the opportunity on Friday to push the conversation to head coach Josh McDaniels and general manager Dave Ziegler about having a third quarterback on the active roster come Tuesday.

Last week against Miami, Garbers completed 6-of-9 passes for 54 yards and had a quarterback rating of 82.6. He’ll look to continue that success on Friday.

During the preseason, we have seen the injury bug affect multiple positions for the Silver and Black, including the interior defensive line.

Over the last week, we have seen the return of defensive tackles Johnathan Hankins and Bilal Nichols. As a result, their time away has opened up opportunities to establish the depth on the defensive side of the trenches.

Some of those players who have seen opportunities include Andrew Billings, Kendal Vickers, Matthew Butler, Tyler Lancaster and Kyle Peko.

Those who play on the line Friday will be a good test to see not only where prayers are at individually, but also for defensive line coach Frank Okam and defensive coordinator Patrick Graham to finalize the different sets of tackles in certain situations.

During Las Vegas’ past two preseason games against Minnesota and Miami, the battle for the third wide receiver role behind Davante Adams and Hunter Renfrow has really taken shape between Keelan Cole Sr. and Tyron Johnson.

Related: 5 takeaways from the Las Vegas Raiders’ 15-13 win in Miami

This third wide receiver role will not only be key in the offense but will also have a big role in the return game on special teams.

Both players recorded at least three receptions and 32 yards and totaled 12 targets last week in Miami. Those 12 targets were almost half of the entire number of passes the quarterbacks threw.

That volume shows how many opportunities both players are getting to get looks on film and for the coaches to evaluate that role further.

This is a battle that could easily be split because of the strengths both players have in this offense and to the special teams units.

Related: Davante Adams adapting to new life and a deep receivers room in 2022

4. Final decisions for the right side of the offensive line

In addition to the third wide receiver battle, one of the starting spots still up for grabs is the offensive line, primarily on the right side.

Kolton Miller at left tackle and Andre James at center are set in stone already for Week 1. It is also pretty safe to say that John Simpson has the left guard position.

As a result, there are about four players fighting for two spots between right tackle and right guard.

With all 32 NFL teams having to shorten their rosters on Tuesday, the Raiders could go after a new face to play on the right side, especially with the cap space they have.

Currently, at guard Lester Cotton Sr. and Jermaine Eluemunor seem to be fighting for the starting spots, while Alex Leatherwood and Brandon Parker are going after the right tackle position.

Depending on how McDaniels and offensive line coach Carmen Bricillo feels, rookies Dylan Parham at right guard and Thayer Munford Jr. are also in the fold.

Leatherwood did not have the best showing against Miami, and the entire offensive line unit is so crucial to protect Carr or whoever is under center. Finding the best combination along the right side could be a key to their success as a whole, so they have to get it right.

One of the positives during the three preseason games for the Raiders so far has been not giving the ball up and not committing penalties.

Raiders quarterbacks have not thrown an interception yet this preseason. In addition, the team committed a mere two penalties last week.

The mentality for the team the entire training camp has been accountability as players have policed themselves when a mistake is made during practice.

Las Vegas needs to finish the preseason strong as they look for a perfect 4-0 preseason record and go into the regular season with some positive momentum as they take on tough divisional opponents in the AFC West.