The Baltimore Ravens and New York Jets kick off their 2022 campaigns with a Week 1 matchup in the tri-state area that has several intriguing storylines to look out for on Sunday.

The Ravens and the Jets enter the new season with very different expectations. While the boys from B-More finished with an 8-9 record and finished in last place in 2021, there is hope the squad can compete for a playoff spot this season. However, for the Jets, some major injuries have already set the team up for early season failures in year two of the Robert Saleh and Joe Douglas regime.

With the teams set to kick things off at 1 PM ET on CBS Sunday afternoon, we take a look at four of the biggest storylines to watch in the east coast team’s 2022 NFL regular season opener.

The biggest story in the NFL on Friday was the fact that the inevitable occurred, and negotiations on a long-term contract extension between the Ravens and star quarterback Lamar Jackson failed. Now, the 25-year-old will play out the final year of his contract looking to increase his value in a major way once negotiations restart after the season.

If sports has taught us anything, expect superstar talents to have big seasons in the final years of their contracts. Look no further than the record numbers Aaron Judge is putting up for the New York Yankees ahead of free agency this winter. Fans should expect the former league MVP to have another Pro Bowl season and that will begin with an impressive performance in New York against Gang Green.

Jackson has his sights set on landing a deal similar to the massive guaranteed contract that Deshaun Watson got from the Browns in the offseason. A superstar talent with serious money motivation is a scary thing.

The Jets’ offensive tackle spot has been cursed this summer. First, came the training camp gut-punch news that starting tackle Mekhi Becton would miss the year with another season-ending knee injury. In an attempt to try and stay competitive in 2022, and give young starting quarterback Zach Wilson legitimate blindside protection, the organization shelled on the money needed to sign free agent Pro Bowler Duane Brown. 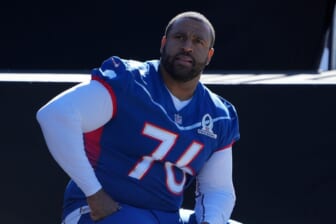 Unfortunately, days before the team’s season opener it was revealed that Brown had a shoulder injury and could be bound for injured reserve. Now, George Fant — the original starting left tackle — will move back to the spot after switching to the right side after Brown’s signing. The Jets line will head into the season opener a talent-challenged group.

Luckily for them, the Ravens were a bottom 10 pass rushing team in 2021. They will need to give QB fill-in Joe Flacco all the time he can get on Sunday. The offense’s success and failure against Baltimore will rest completely on how the line performs in spite of the injuries. Look for the Jets to go old school, make use of their tight ends, and lean on the running back combo of Breece Hall and Michael Carter.

Does Joe Flacco have any winning magic left at 37?

At 37 years old, Joe Flacco is far removed from his athletic prime. And even at his best, he was never a Pro Bowl-caliber talent — although no one can take away the fact that he helped lead the Ravens to a Super Bowl title a decade ago. Based on how he has performed as a backup in recent seasons for New York (seven games, 1,202 yards, nine touchdowns, and 3 interceptions), Jets fans can’t expect much.

However, with this being one of the last times he gets the opportunity to start a few games in a row — with Wilson expected to miss the first month of the season — maybe he can turn back the clock for a few weeks and increase his chances of sticking around in the league for a couple more seasons. Plus, there is the fact of once again facing his old team and getting the chance to stick it to the team and the QB that supplanted him. 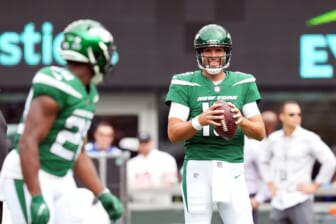 At this rate, that is all New York can hope for because the reality of the situation doesn’t look hopeful for Gang Green on Sunday.

The Jets had three first-round picks in the 2022 NFL draft, and two of those selections could see a good amount of playing time on Sunday. Especially, fourth overall pick and new starting cornerback Ahmad “Sauce” Gardner.

The organization has high hopes that both can be building blocks for the next five years at least. Wilson will be limited by having Flacco tossing passes his way instead of Zach Wilson. However, if he can still shine as the WR3 in spite of that fact that could be a good sign for New York. 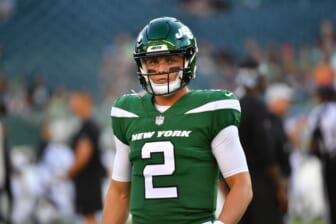 Gardner is the big story as a player who projects to be as good as team legend Darrelle Revis. In Week 1 he won’t have his hands full with dangerous receivers. This means he can get his feet wet, have some early success, and make a name for himself early against one of the elite QBs in the game.