The worst of the XFL from Week 2 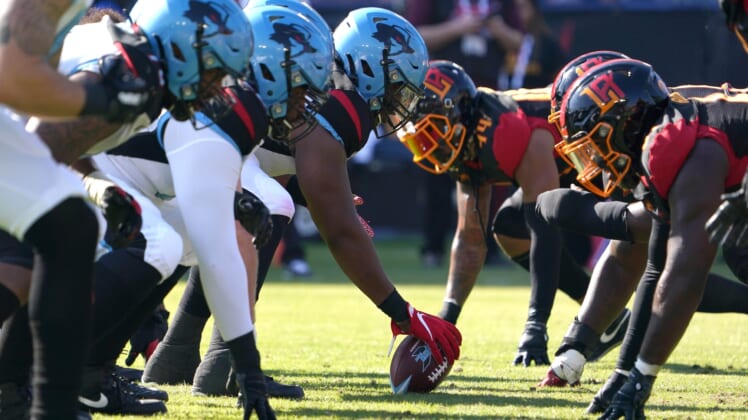 We have a nice taste of what the XFL is all about now after Week 2, and while some of it is amazing, the worst of it shows the league clearly still has plenty to work on.

Looking back at the action from Week 2, we’re taking a hard look at the worst the XFL has to offer in the hopes that, perhaps, the league can figure out a way to make a promising product even better in the weeks to come.

This was the stuff we hated watching the XFL in Week 2.

The XFL has a QB problem

Okay, so the immediate counter to this is that the NFL also has a quarterback problem. That’s totally fair. But looking around the league in Week 2 it’s clear the XFL really has to figure out a way to lure better quarterbacks, or it may end up folding after all.

On Saturday, the only quarterback that did anything remotely positive was D.C. Defenders star Cardale Jones, who continues to look like a shoo-in for XFL MVP. The other five quarterbacks put up a combined 358 yards passing with zero touchdowns and five interceptions.

On Sunday, the so-called face of the XFL, Landry Jones, was prolific throwing for 305 yards, but he also tossed two ghastly interceptions and was lucky defenders dropped a couple more. Longtime NFL veteran Josh Johnson came alive in the second half and tossed two touchdowns, but he also completed just 54% of his passes and the Wildcats’ offense was stagnant much of the game.

The final game of the weekend was the best, thanks in large part to solid quarterback play. Phillip “PJ” Walker is very good and fun to watch. Jordan Ta’amu is raw but has the kind of playmaking abilities this league needs.

But what we’re seeing is that there’s just a few decent quarterbacks in the XFL, and really only two (Walker and Jones) you could say are budding stars right now. The league no doubt has plans of expansion as a major goal, but at this point it’s hard enough to field four good offenses, let alone eight or more.

The XFL at this point is like a slightly reformed NFL with less talent when it comes to the offense that’s being put out there. The league’s relaxed rules and emphasis on big hits and big highlights should have led to more fun than this. But so far we’re not seeing the coaches really unleash a product that keeps us on our toes.

So far, the Defenders are really the only team that’s pushing the envelope much. Perhaps not coincidentally, they’re the team with the best quarterback and overall offense in the XFL.

We would have loved to see the XFL go bolder with its coaching hires, targeting people who want to innovate and really put out a product that defies convention. But instead, the league recycled a bunch of has-beens, and the product has not tantalized the way we hoped it would.

This leads us nicely to our next point.

Part of the reason we’ve been disappointed by the coaching is that offenses are largely struggling to convert after scoring touchdowns.

There is no extra point in the XFL. Rather, teams can add one, two or three points by scoring from two, five and 10 yards out.

That’s four conversions out of 18 attempts total in XFL Week 2. Are we sure the NFL’s extra-point solution isn’t better?

The XFL story that generated the most buzz in Week 2 was not a positive one for the New York Guardians and quarterback Matt McGloin, who appeared to do everything in his power to be released or traded.

McGloin’s play was putrid. He threw a brutal pick-six, two interceptions and completed just 8-of-19 passes for 44 yards (2.3 yards per attempt). Folks, it doesn’t get much worse than that at any level.

Even worse, McGloin unraveled during multiple sideline interviews, blaming everyone on his team except himself for being benched due to his performance. Drama sells, and many had fun watching this play out. But for McGloin and the Guardians, it was bad, bad news.

LA continues to be bad for pro football

The Los Angeles Chargers, and to a lesser extent the Los Angeles Rams, have struggled to establish a dedicated fan base in one of the biggest sports markets in the world. So it shouldn’t be all that surprising that the Los Angeles Wildcats are off to a poor start in terms of attendance, too.

But the scene at Dignity Health Sports Park for the Wildcats’ home debut Sunday was worse than anyone could have imagined. Barely anyone showed up to watch the game, and worse yet the Wildcats dropped to 0-2 on the season and appear to be one of the worst teams in the XFL. Needless to say, it won’t be shocking if things are even worse the rest of the season. And that’s not great.