The unexpected team that will significantly impact NFC playoffs 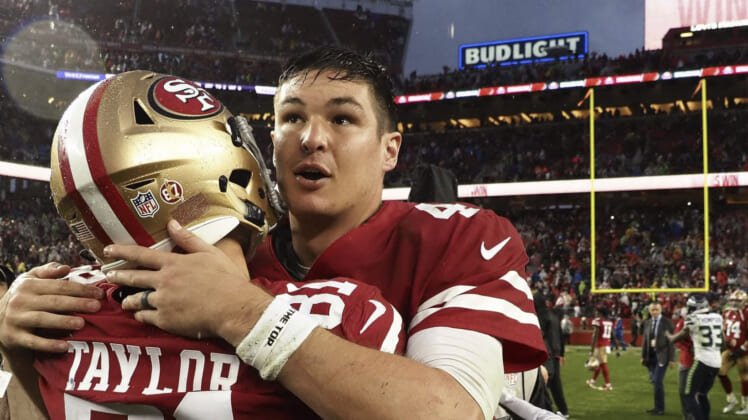 The San Francisco 49ers’ surprising win over a red-hot Seattle Seahawks team this past Sunday could have wide-ranging ramifications in the NFC Playoff race.

At 4-10 on the season, Kyle Shanahan’s squad is playing for pride and draft positioning. Even then, the team came to play big time in a thrilling overtime victory over Seattle, San Francisco’s first win against Russell Wilson an Co. since Dec. 2013.

The backstory here is real. Seattle had an opportunity to clinch a postseason spot with a win over the last-place 49ers at Levi’s Stadium.

But a combination of stellar play from young quarterback Nick Mullens, struggles along the Seahawks’ offensive line and a stout 49ers defense prevented that from happening.

Now heading into Week 16, Seattle is just one game ahead of Philadelphia and Washington for one of the NFC’s two wildcard spots. Sure the team will likely be playing postseason football. But San Francisco’s win over Seattle sets the stage for Kyle Shanahan and Co. to play a major role in the NFC Playoff race moving forward.

Winners of two consecutive after a 2-10 start to the season, San Francisco is set to host the red-hot Chicago Bears this coming weekend.

Chicago heads into Week 16 with a 10-4 record, having clinched the NFC North with a win over Green Bay on Sunday. Right now, Matt Nagy’s squad is locked into the No. 3 seed in the NFC, two games ahead of Dallas for that spot. It’s also just one game behind the Los Angeles Rams for the No. 2 spot and a first-round playoff bye.

Why is this such a big deal? Well, it’s rather simple. Chicago boasts the head-to-head tiebreaker against the Rams by virtue of its Week 14 win over Los Angeles. These very same Rams will host the 49ers in Week 17.

That makes the 49ers pretty darn relevant in the NFC Playoff race despite boasting a meager 4-10 record. Do we expect San Francisco to come out on top against either Chicago or Los Angeles? No. But stranger things have happened.

All four of the 49ers’ wins this season have come at home. In fact, San Francisco has won seven of its past 11 games at Levi’s Stadium. For their part, the Bears are a pedestrian 3-3 away from Soldier Field.

With Los Angeles taking on the lowly Arizona Cardinals this week, there’s a chance that the team can clinch the No. 2 playoff spot despite having lost its past two games. That would include Jared Goff and Co. coming out on top in the desert with the 49ers pulling off a third consecutive upset home win.

On the other end of the spectrum, wins by Chicago and Los Angeles this week would set everything up for Week 17. While Chicago heads to Minnesota to take on a contending Vikings teams, the Rams will host San Francisco in Los Angeles.

The last time these two teams met up in Southern California, the 49ers came out on top by the score 34-13. Sure the Rams were resting pretty much all of their starters in that one, but we’re darn sure San Francisco would love to impact Los Angeles’ Super Bowl aspirations with a win here.

The 49ers’ win over Seattle also created some more confusion in the NFC Playoff race. If Seattle is able to win one of its final two games, Russell Wilson and Co. will be playing meaningful January football. That starts Week 16 against the Kansas City Chiefs in Seattle. A loss here, and the Seahawks would then be forced into a do-or-die game against Arizona in Week 17.

Currently holding one of the two wildcard spots in the NFC, the Vikings boast a 7-6-1 record after Sunday’s blowout win over Miami. It’s a half game ahead of multiple teams for a playoff spot.

What’s interesting here is that Minnesota takes on Chicago in Week 17. The 49ers could also play a major role in that game. If, for say, Chicago comes out on top in Week 16 against San Francisco, the Bears might very well rest their starters for that game.

This would technically enable Minnesota to inch into the playoffs while playing against backups in the season finale. That’s not good news for the Seahawks, Panthers, Redskins and Eagles.

On the other hand, a 49ers win here would force Chicago to play its starters in Week 17. That’s something Matt Nagy and Co. want to avoid. After all, the possibility of injuries late in the season becomes more prevalent.

In what has been a lost season in Santa Clara, the 49ers will play a major role in the NFC Playoff race moving forward. Playing spoiler isn’t something Shanahan’s squad had in mind heading into the season. In no way does that mean the team will back down from this challenge. Seattle found that out first hand on Sunday.