‘The rest is history’: David Ortiz among seven inducted into Hall of Fame 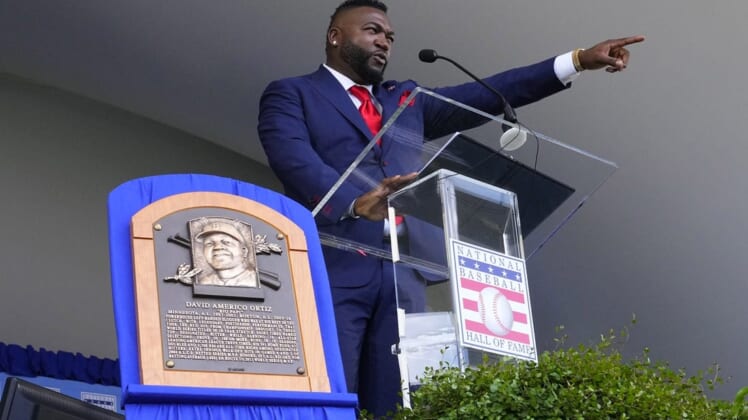 COOPERSTOWN, N.Y. — After a Hall of Fame career built on dramatic hits, batting last was right where David Ortiz wanted to be Sunday afternoon.

“Wow! Cooperstown!” Ortiz exclaimed to an estimated crowd of 35,000 that gathered on a humid afternoon at the Clark Sports Center — where the temperatures approached 90 degrees — in this bucolic upstate town.

Ortiz’s 20-minute speech capped the festivities in which seven men were inducted. Jim Kaat and Tony Oliva, each of whom wore a Minnesota Twins hat on his plaque, spoke before Ortiz, as did a quartet of people speaking on behalf of late Chicago White Sox outfielder Minnie Minoso, late Brooklyn Dodgers first baseman and New York Mets manager Gil Hodges and late Black baseball icons Bud Fowler and Buck O’Neil.

Ortiz was elected by the Baseball Writers Association of America in his first year on the ballot while Kaat, Oliva, Minoso, Hodges, Fowler and O’Neil were elected by a pair of Era Committees.

“It was good that I was left for last,” said Ortiz, who had 20 walk-off hits in the regular season and three more during the 2004 playoffs, when the Red Sox won the franchise’s first championship in 86 years. “That kind of relaxed me a little and I just went at it.”

Ortiz, who led the Red Sox to three championships and hit 483 of his 541 homers for Boston, thanked managers Terry Francona and John Farrell in his speech. But he also referenced a pivotal moment with Grady Little, his first skipper in Boston, during his initial spring training with the club in 2003.

“My very first at-bat against the Twins in spring training, I tried to move a runner over and I thought when I got back to the dugout, everybody was going to high-five me,” Ortiz said. “Everybody stayed seated. And the manager pulled me to the side and told me, ‘Hey big boy. I don’t want you to be here to move them over. I want you to be here to bring them in.’

“The rest is history.”

The folksy Kaat, who won 283 games and 16 Gold Gloves while playing in parts of four decades, led off with an 11-minute speech in which he recalled his first visit to the Hall of Fame in 1947 to see Lefty Grove — his father’s favorite player — get inducted.

At a press conference later, the 83-year-old said he didn’t think he would join Grove in Cooperstown.

“Quite frankly, I had the Hall of Fame in my rearview mirror,” Kaat said. “I wasn’t bitter about it. I just sort of came to the conclusion it was for dominant pitchers, perennial Opening Day pitchers, perennial All-Star pitchers. This might be the first time they actually rewarded durability, longevity.

“For years it was, ‘Well, it took him too long to accomplish what he did.’ But I took a lot of pride in pitching as long as I could, and so it feels nice to be here.”

Oliva, who turned 84 Wednesday, also referenced the long path he took to Cooperstown. He led the American League in hits five times and twice finished second in the AL MVP balloting during a career spent with the Twins from 1962 through 1976.

“If I didn’t go to the Hall of Fame (this) time, it’s all over for Tony,” Oliva said with a chuckle.

Prior to this year, no one had received more Hall of Fame votes without being inducted than Hodges, who spent the maximum 15 years on the writer’s ballot from 1969 through 1983 and was considered by various Veterans Committee iterations 20 times before being elected last December.

Hodges hit 370 homers for the Dodgers and Mets from 1943 through 1963 before managing the long-woebegone Mets to their first championship in 1969. He died of a heart attack at age 47 in April 1972.

“Our greatest gift, although my father’s life was cut so short, was his influence on those around him,” said Irene Hodges, Gil’s daughter.

Minoso became the first Black Latin American player to appear in the major leagues when he debuted with the Cleveland Indians in 1949. He played parts of five decades — with cameos in 1976 and 1980 — and hit .299 while leading the AL in stolen bases three times. He remained a White Sox ambassador until his death at the age of 89 in 2015 — 74 years after he began playing professionally in Cuba.

O’Neil played in the Negro Leagues from 1937 through 1948 before becoming the first Black man on a Major League Baseball coaching staff and a scout who signed three Hall of Famers — Ernie Banks, Lou Brock and Lee Smith. He died at age 94 in October 2006.

“Uncle John was a man for all seasons whose core was brotherly love,” said his niece, Dr. Angela Terry.

Hall of Famer Dave Winfield spoke for Fowler, who grew up in Cooperstown and was often the only Black player on baseball teams in the late 1800s before he founded the Page Fence Giants, a famous Black barnstorming team, in 1895. Fowler died in 1913, seven years before the Negro Leagues were formed.

“Remember him as a skilled athlete who endured obstacles that are hard to imagine today, as an early force integrating the game and as a visionary who attempted to create a league of their own when the roadblocks of his time were present,” Winfield said.