The Paper Game: Bizarre Night Ends with Another Raiders Loss 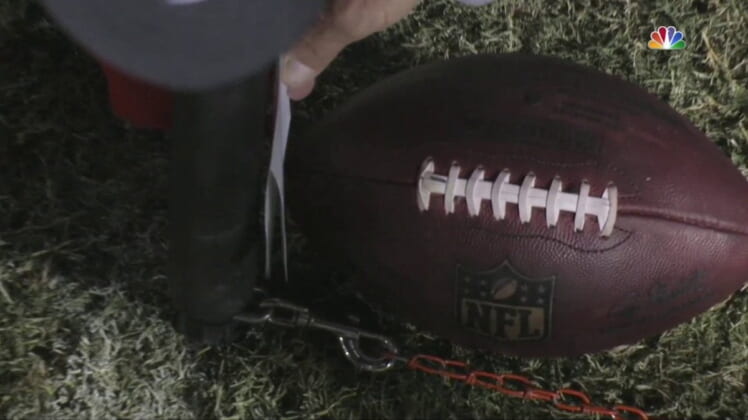 In another bizarre twist of events, the Oakland Raiders are on the receiving end of another idiotic officials call, but it was their lack of consistency that doomed them from the start.

This was one of those games only the Oakland Raiders could have played in.

Bizarre and lopsided calls against the Raiders, along with another game full of inconsistent play, doomed the team as they lost another game at home, 20-17 to the Dallas Cowboys. The game all but ended the Raiders chances of making the playoffs this season.

What this game will be remembered for is the mockery that is NFL officiating as a crucial – and what ended up being the game winning – first down was given to the Cowboys based on a folded piece of paper.

Yes, the multi-billion dollar industry that is the NFL allowed its officials to decide a call – and by default a game – with a piece of paper.

As the video shows, the Cowboys were short of the first down yet inexplicably the referee awarded Dallas the important first down. The Raiders would have taken over, with momentum, on the 40 yard line. It made all the difference in the world.

“I’ve never seen air between the ball and the marker called a first down before,” Head Coach Jack Del Rio said holding back, I’m sure, more choice words. “There was clearly air. What do you say?”

@NFL This isn't even close not a first down #Raiders #Cowboys pic.twitter.com/EyW1PQISoY

What Del Rio didn’t say, I can say: it was a sh*t call. How this crew can work another game after one of the worst calls over the last several years is beyond me. It showed just how ridiculous the NFL has become. Sure, the league makes money hand over fist but it’s lost credibility almost every week this season. Between protests, bad calls, infighting, domestic violence, and other drama, is it any wonder ratings and interest is waning.

But, again, the Raiders get screwed.

“I haven’t seen that before,” Derek Carr said. Short, to the point, and typical for the squeaky clean Carr.

For Raider Nation, it’s nothing new. The Tuck Rule and now The Paper Game. If only Al Davis was here for a post-game press conference.

While we will be talking about this travesty for years, in the end, the Raiders still could have won the game.  Carr, in trying to lift his team and make a play at the end of the game, tried a bit too hard and fumbled through the back of the end zone resulting in the game-ending touchback that sealed the fate of Oakland this season.

Carr hasn’t been himself since week two, as Scott Winter and I discussed in last week’s podcast. The second half of the Cowboys game we had glimpses of the 2016 Carr who came back late in games and had earned a reputation as the Comeback Kid. He showed that again tonight but tried too hard in the end to make something happen.

Then he fumbled. Reaching for the unreachable end zone pylon. The ball squirted – in bounds – through the back of the end zone ending the game.

“I try to create and help my team win,” Carr said. “I tried to get it done and didn’t hold on to the ball.”

It really was a fitting almost-end to what has been an odd, disappointing, and hard to figure season for a Raiders squad coming off a promising 12-4 season in 2016.

What this season comes down to is a lack of consistent execution by this team on both sides of the ball – and especially on offense. Yes, The Paper Game was a joke for how, again, the Raiders get jobbed over and over by the NFL.

Yet, the Raiders season is all but over due to their shortcomings on the field. Even if the referees continue to diminish the value of what is a great game.