The most hated teams in all of sports 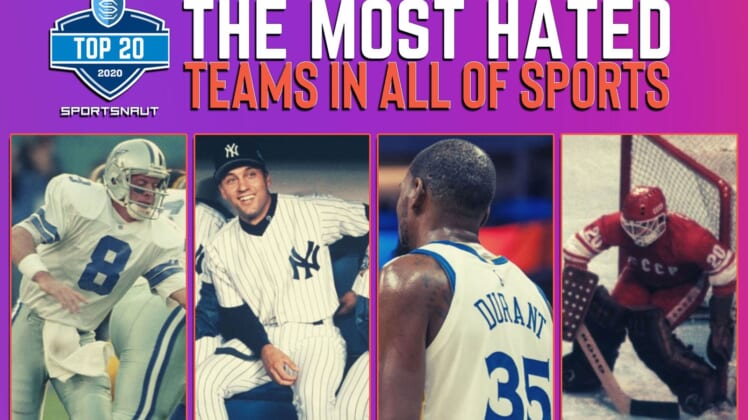 Sports is full of passionate fans. Throughout all of sports, fans religiously follow their favorite team’s every move. As much as fans love their team, they wholeheartedly hate specific teams.

Within the sports community, there are teams that are universally hated by everyone who isn’t a die-hard fan. For various reasons, they rub everyone else the wrong way. With that in mind, here are the 20 most hated teams in all of sports.

This team makes the 1988 Detroit Pistons look like saints. This team was full of heavy hitters, dirty plays, and pure savageness. The Raiders were beloved by their fans, but the rest of the league feared them, and therefore, hated them.

Going into the 2011 season, the Eagles had a very hyped free agency class. They signed all of the big names including quarterback Vince Young. Young would proclaim this team as the “Dream Team,” and when a player does that, the hate will soon follow. Fans were rooting for the team to crumble, and it did exactly that, finishing 8-8 while coming nowhere close to meeting dream-team standards.

This team is hated for a very different reason than everyone else. Even in 2020, they still brag about how they won the 2008 NBA finals. Nothing will make people hate than refusing to stop talking about something that happened over a decade years ago.

Having the best player to ever play the sport will cause people to hate. Winning four Stanley Cups in five years will cause the hate to grow even more. Similar to the Dallas Cowboys, hockey fans rejoice that the Oilers have not had success in a very long time.

This was the period that started to ignite the flame of hatred that the NFL world has for the Cowboys. Winning three Super Bowls in four years caused the hate to be born. Every year since then, fans across the country take solace knowing the Cowboys are not in the Super Bowl.

A 111-game winning streak is uncanny. A streak like that is unheard of, especially at the collegiate level. For three years, haters waited for the inevitable moment that the UCONN women’s basketball team would falter. It happened, but it happened after 111 games. Even when the streak ended, the haters did not have much to cheer for as the Huskies had already made history.

Like the 2007 New England Patriots, this team was so close to perfection. It was led by a group of dominant freshmen, and the Wildcats remained undefeated until they lost to Wisconsin. Fans rejoiced at the fact that a powerful squad like Kentucky would not have the title of going undefeated.

They were up 28-3 against one of the most hated franchises in all of sports. The Falcons had a chance to embarrass the Patriots on the biggest stage in all of football, something no one has ever done. Yet, they allowed Tom Brady to solidify his status as the greatest ever, and as a result they are hated for “what could have happened.”

Alabama football is despised by almost every college in America. Coach Nick Saban has installed a program that seems to never lose, and it is constantly beating the brakes off opponents. When Johnny Manziel and Texas A&M beat them, the nation celebrated. This loss was so sweet for Alabama haters because Manziel beat the Tide by doing everything they were against: He was having fun.

Whoever is winning in the Premier League is the team that is the most hated. Right now, check every comment section on a Liverpool post and it’s clear fans do not win their success to continue. The trio of Mohamed Salah, Sadio Mane and Roberto Firmino has led Liverpool to tremendous success. When they lost to Atletico Madrid, fans celebrated so much to the point it now seems they will never let it go.

There was a reason this Piston’s team was called “ The Bad Boys.” Bill Laimbeer led the way for the Pistons to become the dirtiest team in basketball. He was constantly starting brawls, and if it wasn’t him starting it then one of his other teammates getting the fights ignited.

Bringing up the 2004 Red Sox team in New York will be met with grunts and curses. In the ALCS, Boston came back from a 3-0 series deficit, a historic feat, and ended up winning the World Series. In classic Boston fashion, they will never let anyone forget it.

One of the most hated players in College Basketball’s history is Chrisitan Laettner. He was one of the best players in the country at the time, and he very much knew it. The way he conducted himself boiled the blood of many basketball fans, and ever since then, the two time National Champion has made Duke one of the least-rooted-for teams in college basketball.

This Yankee team was the start of the franchise winning three World Series in a row. The Yankees are historically hated because the perception is they simply spend more money than other teams. The hatred of the Yankees is still very prominent and it all stems from their historic run.

Lebron James went on national television to announce he will be joining the Miami Heat with All-Stars Dwyane Wade and Chris Bosh, forming the first modern NBA super team. They had a rough start to the season, and they ended up losing to the Dallas Mavericks in the Finals. Fans were ecstatic to see the Heat wilt in the spotlight and to see Lebron crumple when his “super team” needed him.

The Houston Astros conducted the biggest scandal in Major League Baseball’s history. The Astros stole the pitching signs and used a various number of schems to alert the batter of the upcoming pitch. They robbed the Dodgers of the World Series and ended several careers over illegitimate strategies. Their unapologetic nature led to even more hatred by fans and even players. In Spring Training, they were hit by pitch the most out of any team, and that will carry into the regular season.

The movie “Miracle on Ice” highlights the gravity of how important it was for the United States to beat this Soviet Union team. At a time of political tension, the people of the United States rallied behind their ice hockey team. The United States would pull off one of the greatest upsets in all of sports.

In 2016, the Warriors blew a 3-1 lead against Lebron James and the Cleveland Cavaliers. Their response was to add a top-3 basketball talent: Kevin Durant. Durant would join the same team that eliminated his Oklahoma City Thunder and join a historic team that just won 73 games.

During the two decades of the Bellichick and Brady era, there has never been a more hated franchise in the National Football League. Every year, they go in despised by the NFL community, and there is not a team more hated than the almost perfect 2007 Patriots. If it wasn’t for Eli Manning and the New York Giants, this team will lead in infamy, and therefore, forever hated by everyone outside of Massachusetts.