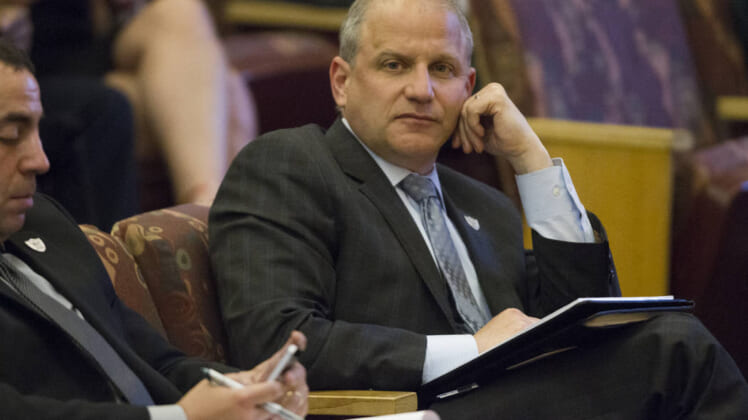 The Las Vegas Stadium Authority Board concluded their March 1st meeting addressing the Stadium Development Plan and the Raiders continue to chip away at the parking plan for Las Vegas.

Marc Badain and Raiders Working Hard, Ahead of Schedule on Parking

Today’s meeting’s takeaways were numerous but the excitement put forward by doubting fans and the media around the team’s parking plan were once again front and center.

The Raiders announced they are in continued negotiations to secure roughly 27,000 parking spaces within 1.5 miles of the stadium site. The Clark County requirement is 16,250. As I said last week, the amount of parking adjacent to the stadium site is more than enough to provide what the team and fans need. Although details need to be ironed out (financial, logistical), the parking “problem” is not a problem. It’s a planning issue that, clearly, the team is making significant progress on and the dearth of parking for the project has been vastly overestimated. In fact, Raiders President Marc Badain referred to current NFL stadiums that have far less onsite parking than even the 2,500 that will be built on the stadium property itself.

“There’s some stadiums that have as few as a few hundred spots and utilized downtown areas and other means,” Badain said.

When Badain was asked to expand on where geographically they were negotiating on parking areas, he showed again his media savvy and ability to keep those discussions confidential until deals are formalized.

“Some in the west, some in the north, and some in the south, Badain said. “Not to be overspecifc. We want to respect the privacy of those discussions.”

Badain did say the team is running into some prospecting land owners who are clearly jacking up prices to take advantage of the team’s need to finalize a parking plan.

“We have talked to property owners all around the site,” Badain said. “Some are interested in selling the land, leasing the land. Some people are being opportunistic and others are being realistic. You can take from that who it is we’re talking to.”

One of legacy fans biggest gripes on the smaller footprint of the new stadium site (the site at 60+ acres is still 40+ acres larger than the site of US Bank Stadium – site of this year’s Super Bowl), and lack of on-site parking, is tailgating areas. The Raiders fan culture has been built around tailgating in Oakland but Badain cleared up some misconceptions by clearly stating it’s not as big as some make it out to be.

“We have approximately 3,000 active tailgates at our stadium (in Oakland) right now,” he said. “We have 9500 spots at our current facility. I don’t know that the numbers will be identical but it gives you a good ballpark figure. The experience may be different when we get to Las Vegas but we’re actively addressing locations for tailgating in the area.”

Badain was sincere with his and the team’s focus on tailgating but also reiterated many fans will want to get to the games in other ways including walking, using public transportation and more.

Again, there are issues that need to be resolved but our sources in Las Vegas continue to tell us, in the end, parking will be tied up and concerns will be allied very quickly. The Raiders are working closely with local business and landowners to create a plan that will work for everyone.

“Chucky” Is Back – With A Vengeance

As we reported yesterday, Jon Gruden was back in full “Chucky” mode during his press conference yesterday at the NFL Combine.

Watching the replay (about three times on my end), gone was the Monday Night Football personality and in his place the focused, scowling Gruden we’re all used to. He continue to show why his ability to lead and change cultures within an organization is a welcomed breath of fresh air for the Raiders and the NFL.

While Raider nation continues to be excited about what the coach will do for the Silver and Black, perhaps lost in all of it is what his return to the sideline means for the entire league. The coaching ranks, despite great football minds, lacks personality in this modern era of football. Gruden’s intensity and direct, aggressive approach, brings some much-needed attitude back to the coaching ranks.

Getting some unfettered Gruden yesterday will undoubtedly continue to fire up the base and the Raiders organization.