The Gruden Way or the Highway 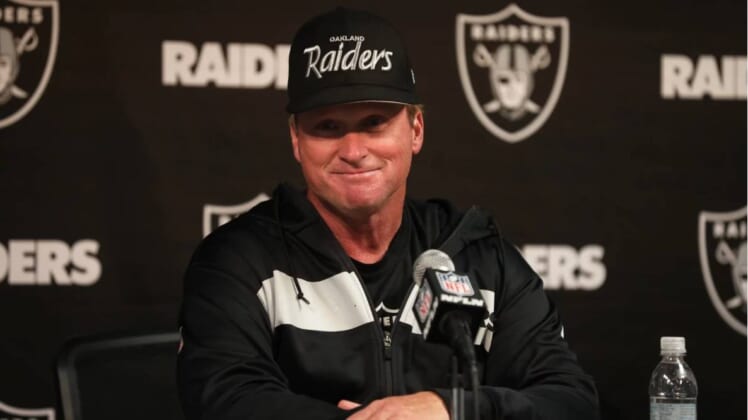 Whether or not there is true division in the Oakland Raiders front office is up to interpretation and no one knows for sure. What is certain is this is Jon Gruden’s team – win or lose.

You’ll read numerous accounts today on the events of the past weekend in Alameda and how it will shape both the current team and the future for the Raiders. After a weekend full of Raider Nation disappointment, anger, acceptance and some level-headed discussion, head coach Jon Gruden finally met with the media last night — a media that had some perplexing, shocking and downright odd reactions after defensive end Khalil Mack was traded to the Chicago Bears.

There were many questions to ask of the coach as he strode to the podium dressed in a track suit and Raiders throwback ball cap. The Chucky smirk and scowl was ever-present as he almost certainly knew questions would be direct and, perhaps, unfriendly.

No real surprises emerged except for several times where Gruden reiterated he had nothing to do with the Mack negotiations. That fell squarely on the front office, including GM Reggie McKenzie, he insisted. Many scribes and journalists have characterized that as throwing his general manager under the bus. That narrative was already in the can before the press conference started, so take it for what it’s worth.

I’m going to give him the benefit of the doubt here and assume he’s operating under the Belichick principle. But he’s got to prove he can be disciplined in it. – Michael Lombardi, former NFL GM/Executive

From the outside, McKenzie was marginalized the day Gruden was hired. Surely you don’t pay a personality and a coach $100 million and have him take orders from McKenzie, they said. Gruden portrayed as the Wizard of Oz behind the curtains with McKenzie little more than a puppet. How could the GM trade a player that was his most successful draft pick and, perhaps, his legacy player in Oakland?

“I’m not going to get into the negotiations,” Gruden said during his press conference. “Reggie and Tom Delaney and the people who were negotiating were involved in that. I know there’s some feeling that I was involved on a day-to-day. I had nothing to do with it. We were at a standoff. Something had to happen and here we are.”

A good majority of people have taken that as Gruden tossing blame for trading a fan favorite to Chicago on McKenzie. In order to buy into that, you have to believe Gruden is lying or purposefully blaming McKenzie to ensure the “stink” of this trade doesn’t stay on him. Some already have that view and others do not.

What is certain from the events since Gruden took the helm of a franchise with one winning season in 14 years is he’s reshaping the roster the way he believes he needs to in order to win. Is McKenzie on board? Or is he just biding his time until he can get the hell out of Alameda? I don’t know. Maybe he’s talking to some folks and they’re giving us some inside info masked as editorial. As with the Mack trade itself, and Gruden’s other roster moves, only time will tell.

What’s curious is the reaction of fans, media, football experts, et al., who are perplexed by his moves – especially the Mack trade. Remember: most of these people dismissed Gruden as over-the-hill and out of touch the moment he took the job. For them, this reinforces that belief and they’re running with it. For those more pragmatic, like former Raiders executive and Cleveland Browns general manager Michael Lombardi, there might be a method to the perceived madness.

“This is really important for Raiders fans,” Lombardi said Sunday on our CBS Sports Radio 1140-AM show. “Jon’s got to be dedicated and disciplined to the philosophy (like Belichick in New England). “If he turns around and gives Amari Cooper up to $18 or $19 million, then I’m going to say wait a minute. That’s not the right thing to do.”

.@mlombardiNFL joined us this morning @SportsRadio1140 to give valuable insight on why the #Raiders were willing to trade #KhalilMack. Listen to the entire interview here: https://t.co/EDaQ9SkPkz pic.twitter.com/hewMFOJ9d4

Cooper’s contract will be the next large deal the Raiders must contend with. Although the wideout hasn’t reached his potential in Oakland, big things are expected in 2018 and the market for players at his position continue to climb. Will Gruden and company stay disciplined as they did with Mack?

We also have to build this football team. We’ve had one winning season in 14 years. We have to do it the right way. We have to make some tough decisions like we have since the beginning of free agency – Jon Gruden

“I’m going to give him the benefit of the doubt here and assume he’s operating under the Belichick principle,” Lombardi continued. “But he’s got to prove he can be disciplined in it.”

Gruden is forging ahead with the team’s strategy and that didn’t include paying the most talented defensive end in the game $23 million a year. The name of the game in the NFL is depth and clearly, that’s what the Raiders chose over a generational talent they may never replace fully.

“We have to put together a 53-man roster. It’s hard,” Gruden said. “Salary cap issues do exist. There’s an economic part of this thing, too that you have to sit down and study and get a lot of information from a lot of people to see how it impacts you, a contract of that magnitude.

“We also have to build this football team. We’ve had one winning season in 14 years. We have to do it the right way. We have to make some tough decisions like we have since the beginning of free agency. This is tough to swallow. We wish Khalil the best, obviously. We need some of our players to step up.”

Like it or not, agree with it or not, Gruden and the Raiders are going to do it their way.

Media Reaction Downright Odd for Some

Being a writer and publisher of a media website, and host of a radio show, I make mistakes all the time. Because Raider Nation misses very little, I am usually reminded of that each time I make them. Being in the business of creating content comes with ups and downs we all face.

This weekend’s trade of Mack to the Bears brought out some strange and unusual reactions. Several media members responded to the news with a more personal and almost fan-like response. It was as if the Raiders had traded them.

In most cases, you try to stay objective and report on the team. When you have an opinion-based column, you have some latitude to inject your own personal view. That’s expected. The lengths and methods used by some over the weekend to express their disapproval of the trade crossed the line many times. I’m not here to pile on or name names as I think readers can already attest to this activity and the folks involved.

Still, one writer self-corrected and you have to respect that. Tyler Smith over at Silver and Black Pride published a mea culpa on the Mack trade and how he had dismissed reporting on others leading up to the move. Kudos to him and he brings up great points in his column sharing his journey to the apology he had for his readers.

Being Las Vegas-based, we also sense some of the reaction related to the Raiders impending move and promise they would try to win before they leave Oakland. The tone of betrayal in many social media posts certainly backs up that assertion.

Either way, getting back to football on the field will be good for all of us.