The Grinch That Stole the Raiders Offense 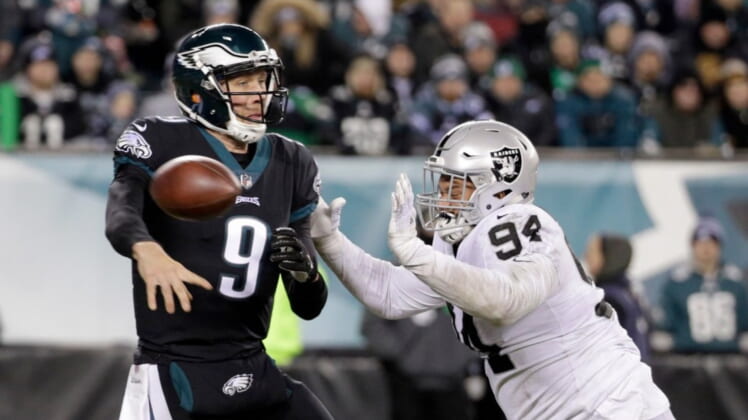 The Eagles won but were not dominant. (AP Photo/Chris Szagola)

For the Oakland Raiders, not much has changed from Week 3 as the Silver and Black offense sputters yet again dooming the team in another Prime Time loss.

The Philadelphia Eagles played the role of The Grinch last night downing an ineffective Raiders offensive squad 19-10, as Oakland fell to 6-9 overall.

The story once again: the inability for the Raiders offense to do just about anything consistently, coupled with five turnovers, meant Oakland missed yet another opportunity to win a close game. A week after fumbling away a win against the Dallas Cowboys at home, the Raiders again could not hold on to the ball losing three fumbles and two interceptions against an Eagles team still smarting from its loss of MVP candidate and starting quarterback Carson Wentz.

The offense is quite simply the underlying reason the Raiders are not in the playoffs and continue to lose. Franchise quarterback Derek Carr has regressed significantly and threw two key interceptions last night and finished the night with a 48.1 quarterback rating. It was his worst performance of the season.

The Raiders offense, in case you missed the first 14 games of the season, is broken, and Derek Carr, the Raiders’ $125-million quarterback, has regressed. Mightily. Under first-year offensive coordinator Todd Downing, the offense became too simplistic… https://t.co/XRYL0MiMsl

“Everyone should feel sick right now,” Carr said at the postgame press conference. “We didn’t do well enough in the second half to win the game. The defense played well, kept getting us the ball back. I love those guys but looking at our guys (offense) we have to get better.”

Carr is a stellar human being but that was the understatement of the year. He was awful in Philly and put up – technically – his worst performance of the season in the loss. Carr’s future is still bright, but he needs someone who is going to work with him to get back to where he was in 2016. He’s one of the main reasons the Raiders offense has been beyond ineffective in 2017.

It’s now becoming apparent that Offensive Coordinator Todd Downing isn’t long for the organization and Head Coach Jack Del Rio isn’t as safe as many would have thought. It would be surprising if Del Rio isn’t back in 2018, but certainly the team’s regression isn’t helping from making his seat a little hot.

Raider Nation knew going into 2017 the defense would have weaknesses that were not addressed during the offseason. Many believed that would be the Achilles heel for this team. No one – and I mean no one – thought the offense would completely collapse. A combination of coaching, scheme, lack of focus, and underperformance on the roster made the offense literally the complete opposite of what it was last season.

The regression of Derek Carr is one of the main reason the Raiders offense has faltered. (AP Photo/Chris Szagola)

As a result, one or more coaches will be kicked to the curb. You can’t avoid it now. There has been no overall improvement on offense and with apparent leadership lacking, a change is imminent.

The question becomes this: can it be fixed? Or do you (outside of Carr – and no, Carr haters, he’s not going anywhere) blow up the offensive roster?

Some facts: While Marshawn Lynch has been a good addition, he hasn’t been a game changer. I’m not so sure he’ll be back. With both Jelan Richard and DeAndre Washington, the Raiders have talent and could add another via free agent who doesn’t have the baggage.

At wide receiver, Amari Cooper was a mess this year but still talented and you have to bring him back. Michael Crabtree is still your #1 wideout but was under utilized which should be rectified with a coaching change and work to get Carr back to where he should be. The rest of the Oakland wideouts are disposable.

The offensive line: after big paydays, the line still played well but was inconsistent at times. I believe it’s an overall focus issue on the offensive side of the ball. That comes down to leadership and coaching, in our view. They’ll find their way back to where they should be with a change.

There’s still one game left against the Los Angeles Chargers who are fighting (with lots of help needed) to try and make the playoffs. I’d like to say the Raiders have an edge in front of a pseudo-home crowd and playing for pride. As we’ve learned, it never seems like this team is ever on the same page when it comes to gameday so there should be no expectation they can win that one either. We’ll have plenty of time to analyze the needs and work that has to be done in the offseason after Week 17 in LA.

Right now, all we can go by is what we’ve seen on the field and it’s not good. Someone has to take responsibility for what has been a woefully disappointing season.

January looks to be a difficult one in Raider Nation – especially if you’re a coach or player who struggled in 2017.