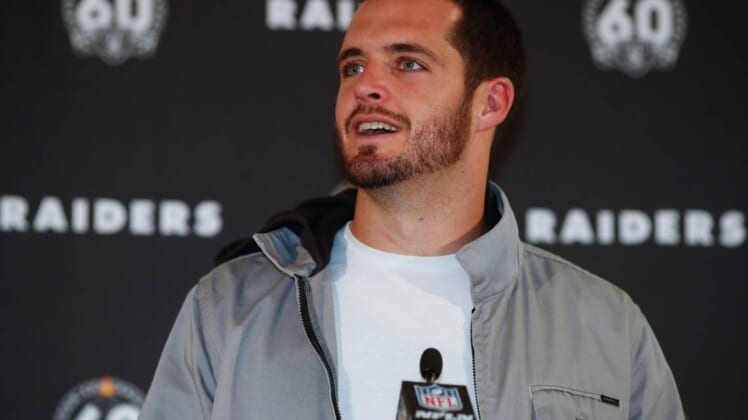 While Raider Nation remains divided on the future of Derek Carr as the Raiders quarterback, the talk should heat up this week at the NFL Combine about a possible trade but does any of the chatter really matter?

During a week when a man’s hand size and whether or not he runs around some orange cones with speedy resolve become headlines at the NFL Combine, for Las Vegas Raiders fans it could be another week filled with Derek Carr speculation.

Without a clear and resounding vote of confidence from both general manager Mike Mayock and head coach/shadow GM Jon Gruden, Carr’s status is open to interpretation. Whether or not you believe they could, or would want to, trade one of 2019’s most efficient quarterbacks will be based largely on where you sit on the debate.

This week, when NFL teams gather to evaluate incoming college players ahead of the NFL Draft in April, coaches, GM’s and team’s chit-chat and start talking about other business ahead of the league’s new year which begins March 18. That includes trades.

Wild speculation about Derek Carr’s future in Las Vegas was fueled this week as Pro Football Talk wrote about Carr’s own social media posts asking if he was signaling something. Carr inexplicably posted a photo of himself (said Instagram post below) with former teammate – and current Chicago Bears DE – Khalil Mack. Some read this as a signal Carr was either expecting a trade (even to Chicago, perhaps) or signaling he wanted out. Of course, it was instead next-level trolling by the QB according to his brother David Carr.

Despite there being no indication, sans media reports and speculation, the Raiders are looking to shop Carr or make a change at the position, it’s out there and so those of us in the media have to deal with it and talk about it. That doesn’t mean we think it’s imminent or calling for it to happen.

Still, this could all be avoided by the Raiders if they just gave that public vote of confidence. Why haven’t they? Are people reading too much into it? Will the Raiders listen to teams about Carr at the Combine? Will they get Carr more weapons on offense and shouldn’t that be the focus?

Scribes and broadcasters with experience and knowledge far greater than mine all seem to believe the narrative about the lack of something between Gruden and Derek Carr. It could be completely offbase, or it could be accurate. Both Gruden and Carr dismiss the idea but what would you have them say?

I don’t care who the GM/coach are, you have to always be open to upgrading your team at each and every position. That includes quarterback – even with an established starter. You listen to everything but that’s a far cry from looking to unload a player. Despite reports about interest in Derek Carr around the league, there’s been no credible reports or indications the Raiders are actively looking to trade their current franchise QB.

That doesn’t mean you don’t listen. If you get an offer that you can’t refuse and decide you want to go a different direction at the position, then you might pull the trigger.

Still, those who argue the Raiders are fine with Carr shouldn’t be triggered by the chatter you hear this week. It’s the nature of the business both for the teams and the media.

During a week when fans and the team alike will be focused on evaluating players for the 2020 NFL Draft to be held in their hometown of Las Vegas, the topic of Carr and his future could dominate the narrative.

Those who want the Raiders desperately to move on to another QB, don’t get your hopes too high. No one knows what the market really is nor whether or not the Raiders would move on.

Also remember this: NFL teams have an unprecedented free-agent crop of quarterbacks this year led by one of the greatest of all-time – Tom Brady. There’s a slew of experienced free agents at the position not to mention a good crop of college quarterbacks in the draft. There are lots of choices and there’s no indication Carr is a hot commodity in the trade market – at least right now.

One thing is certain, the uncertainty – or at least the appearance of it – isn’t exactly fair to Derek Carr. It doesn’t matter if you believe in him or don’t, every player in his role deserves some sort of acknowledgment of where things are at. Either come out and say he’s your guy, or don’t.

For all their success in the draft, and working relationship thus far, we do know both Gruden and Mayock keep things close to the vest. By not making some declarative statements about Carr, they leave it open to interpretation by media, fans, and players. That’s why it will be a question asked at this week’s NFL Combine.

While it seems a bit unfair to Carr, perhaps this is how they want it and maybe they’ve already privately told Carr where he stands at the moment. We don’t really know so we take the information we have and make an informed hypothesis.

And while anything is possible, and football fans in Raider Nation need something to talk about, don’t take too much stock in what you hear this week. That doesn’t mean we shouldn’t banter around ideas and speculation.

No matter what happens, for Raiders fans this just may very well be the Derek Carr NFL combine.