The Case for Henry Ruggs III for Raiders 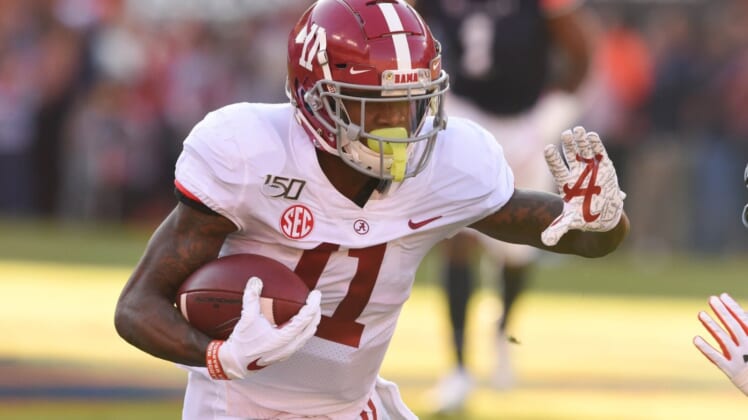 Although most consider him to be ranked third amongst the Top 3 wide receivers in this year’s NFL Draft, Alabama’s Henry Ruggs III might just grab Jon Gruden’s attention enough and bring out the inner Al Davis in the Las Vegas Raiders coach.

When Raiders fans talk 2020 NFL Draft, and their beloved silver and black drafting a speedy wide receiver, most of them don’t rank Alabama’s Henry Ruggs III as their first choice. With the talented tandem of Ruggs’ Alabama teammate Jerry Jeudy and Oklahoma’s CeeDee Lamb most likely available at pick No. 12 in the first round, most believe those two are a bit better than Ruggs so general manager Mike Mayock and Gruden will take the better of the three players.

The conventional wisdom might have Jeudy and Lamb ranked higher than Ruggs III, but the electrifying speed and ability of Ruggs might just capture the Raiders attention enough to surprise all the mock draft experts and see Las Vegas nab the player who ranks third all-time in touchdowns for the Crimson Tide.

Here’s our case for why Ruggs III might be the best choice for the Raiders in the upcoming search for their big vertical threat wide receiver.

While many teams strive to draft the most complete ready-to-play wide receiver available, some of Henry Ruggs III most glaring weaknesses can be overcome through instruction and work at the NFL level. What you can’t teach or “coach up” in a football player is natural speed.

Ruggs III, upon entering the NFL, will be the second-fastest wideout behind Kansas City’s Tyreek Hill. Ruggs III clocked a 4.27-second 40-yard dash at this year’s NFL Combine. That was one of the fastest times in NFL history.

Speed is by far Ruggs III’s greatest skill as a wide receiver. And before you dismiss that as a skill not as important or valuable as great hands (which he also has, in fact he has the best hands of the Top 3 WRs in this draft), great route running, or the ability to separate in coverage, understand that speed makes defenders play him differently which creates the advantage.

For example, even on a short pass (say a screen pass), defenders must play off Ruggs III to respect his speed and inherent ability to blow past them. In doing so, even on short routes Ruggs III then has the opportunity to create yards after the catch. Defenders have to play two steps off him as they fear he’ll zoom past them and burn them for a longer gain.

Detractors point out one Ruggs III’s weaknesses though: press coverage. This weakness is a bit overhyped as he doesn’t face press coverage as much due to his speed. Now, that will change at the NFL level due to the increase in speed and talent, but it’s being overplayed a bit in our view. It is true Ruggs III must develop better release mechanics against more physical defensive backs, but, again, that can be taught and he has the talent to overcome this as a pro.

Like his former boss and mentor Al Davis, Gruden does love speed and has talked about the Chiefs’ Hill many times. It’s clear Gruden appreciates what a player with that type of speed means for a vertical passing game.

And even though some make it a hobby to bash Raiders quarterback Derek Carr’s vertical prowess, he does have a big arm and Gruden can already see schemes and play calls that can only happen for someone like Ruggs III.

The Quickest Route to Six

Many a draft guide points out Ruggs III as a route runner with a caveat he sometimes rushes his routes. In watching hours of film on the player, I can tell you, that’s well founded. Even though this sometimes leads to bad outcomes, his athleticism and ability to plant and go far outweigh his route running deficiencies.

Route running refinements aside, his ability to run routes effectively and create separation with his extra gear of speed, will make your mouth water when watching it in action. Because of his speed, and route ability, he keeps corners off balance giving him a distinct advantage every time he lines up. This ability means one thing: he’s an absolute playmaker.

Some will use Ruggs III’s reception total as a negative against him, his route running ability, coupled with blinding speed, resulted in a touchdown every 4.1 receptions in 2019. Yes, he had just 40 receptions but tallied 746 yards and seven touchdowns on a team which included Jeudy. He’s fast, he’s efficient and he gets open. And did we mention his hands?

Kelly Kriner, our NFL Draft expert, ripped off a Raider Nation band-aid when during one of my Tweetstorms advocating for Ruggs III coming to Las Vegas, reminded me (and you!) about another speedy wide receiver who ended up being a bust for the Raiders: Darrius Heyward-Bey.

And although his point was made, comparing the two just isn’t fair to Ruggs III.

While both are known for the ridiculous speed, that’s where the comparison stops. in Walter Football’s 2009 NFL Draft preview of Heyward-Bey, the publication noted Heyward-Bey was not a big playmaker who lacked consistency with his hands and had almost all of his production out of screens and crossing routes. And, with all due respect to Davis, he was drafted way too high for his raw ability. He wasn’t going to make a smooth transition to the NFL and was a project to be certain.

With Ruggs III, it’s the opposite.

Henry Ruggs III is a natural receiver with hands that are almost always money. His ability to adjust to a wide variety of throws and do so while making it look effortless crushes any and all comparisons to the likes of Heyward-Bey. Ruggs III had just one drop in 2019 and he rarely – if ever – outruns the ball. Although he wasn’t always the first option at Alabama with Jeudy lined up on the same team, he still averaged 29.8 yards per touchdown over his career under Nick Saban. He leaves Alabama as the school’s 3rd-most prolific touchdown scorer at the position despite limited opportunities.

Yes, some receivers who have a “case of the drops” can overcome it with coaching and hard work. But with Ruggs III, his natural ability to catch the ball makes him the best hands guy at the position in the draft.

As with every young player, there are also challenges for Ruggs III as he makes the adjustment to the NFL. Those create risk for the team drafting him, but, in our view, he may be worth it.

So what risk is there for a team like the Raiders if they go with him at No. 12?

Primarily three issues: he’s a bit lean and undersized for the rigors of the NFL, he has trouble run blocking and shedding tacklers, and his release against “in-your-face” defensive backs is lacking.

Size: at 5-11, 185-lbs, Ruggs III, again, reminds us of Hill. And while durability is always a concern with smaller players, Ruggs III will benefit from a pro strength and conditioning staff.

Run Blocking/Shedding Tackles: There’s lots of work to be done here and perhaps his greatest weakness. But, again, nothing that can’t be overcome in the NFL setting with quality coaching and better competition.

Release vs. Physical DBs: With increased strength and conditioning, coupled with coaching and better competition, this too can be improved rapidly in year one for Ruggs III.

When it comes to ranking the Top 3 wide receivers in the 2020 NFL Draft, there’s no arguing from me that overall Jerry Jeudy is the most complete and “ready right now” prospect in the draft. Should he get past the Jets or Jaguars at picks No. 9 and 11, it would be hard for them to not take the talented player.

Lamb is also another player who is a balanced talent and shares some of Ruggs III’s weaknesses like trouble with press coverage. He’s an excellent pass catching who can track the ball and adjust even in the air. Yet Lamb doesn’t have the burst of speed (although once he gets going, Lamb is electric) Ruggs III does.

Most writers, fans, talk show hosts will rank Ruggs III as No. 3 on their list heading into the draft. Only one list – the one Gruden and Mayock work off – matters.

For the Las Vegas Raiders to draft Henry Ruggs III in the first round might be viewed as risky by some, but in a division owned and operated by Patrick Mahomes and Andy Reid, the electric playmaking ability of Ruggs III is exactly what the Raiders need to pillage and plunder the AFC West.

Which wide receiver – if available – would you most like to see the Raiders draft at pick No. 12?