The Brand of Gruden and Why it Matters 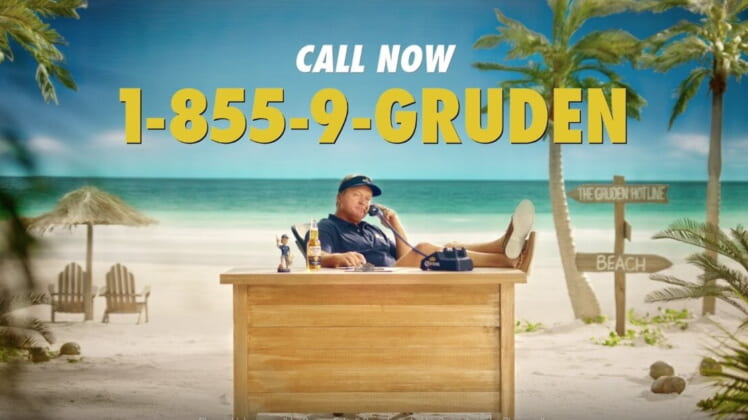 This past Friday, after a crazy week in which the Raiders news both on the coaching front and on the stadium construction front kept me busy, friend, and founder of Las Vegas Sports Biz website, Alan Snel and I broke away for a quick lunch.

Snel – being the new go-to source for news on where business and sports intersect here in burgeoning Las Vegas – and I both talked a lot about the business side of the hiring of Gruden as the new Raiders head coach. He even wrote a funny piece on some possibilities for Gruden once the Raiders relocate here in 2020.

As I mentioned last week before the Raiders made Gruden’s hire official yesterday in a press release, his return to the team is far bigger than just what he can do on the field. While that is a vital ingredient to his success in his return to Oakland, this hire is much bigger for many reasons off the field.

The Raiders didn’t just hire a coach in Gruden. They take on a successful and popular brand which will only allow theirs to gain more value and prepare it for the next big step in Las Vegas. Gruden, through his successful run as coach and now as popular television broadcaster, is more popular than ever and brings with him sponsors and business dealings that increase his visibility nationally and locally.

Whether it’s Corona, Hooters, GoPro, Nationwide, and others, Gruden’s face is everywhere already and even those Kansas City or Denver fans who will now turn to hate him as Raiders coach, still like him more than they’d like to admit. He’s a sports personality and that cache he brings with him back to Oakland – and eventually to Las Vegas – will suit him and the team well.

There’s no denying Gruden is a fan favorite in Oakland. As former All Pro offensive lineman Lincoln Kennedy told ESPN’s Paul Gutierrez in his book 100 Things Raiders Fans Should Know & Do Before They Die: “A little man who wanted to take over the world,” Kennedy said. “That facade that Raider Nation created for him, he wore it well.”

Gruden’s “Chucky” persona is a hit with fans in Oakland.

Now, while Kennedy’s tone may have been with a tinge of bitterness back then, fans in Oakland love Gruden and are going to welcome him back with open arms. That’s important for a team that sits a “lame duck” tenant in Oakland for two more seasons before moving on to greener (and $1.9 Billion) pastures in the desert.

Gruden’t return will help the team sell more tickets, keep fans more positive despite the impending departure. “Chucky” is a brand in himself and the reaction thus far is off the charts in the Bay Area.

He also loves the fans in Oakland as they help create the persona and they will help revive it on the sideline there as well. Look for Gruden, a master at “playing the game,” to play into that strength and help the team sell tickets both by winning on the field, and by being himself off it.

As the Raiders are fond of saying these days: the legacy of the Raiders started and lies in Oakland. The future of the team is Las Vegas and Jon Gruden is exactly the type of guy Las Vegas loves.

With his Hollywood-type persona, Gruden will start to take Las Vegas by storm immediately. Even though fans impatiently wait for 2020 to arrive, expect Gruden to start planting seeds for both the Raiders and his own personal brand right away.

Not since legendary Hall of Fame UNLV basketball coach Jerry Tarkanian ruled the city, has a personality like Gruden’s been present in Las Vegas. Tarkanian was the man everyone wanted to see, have dinner with, hang out with, and cheer on. It worked well for him and Las Vegas has been a bit empty since Tarkanian exited the scene and later passed away.

Gruden will be the heir to the Tarkanian throne and soon be as coveted a brand as any of the headliners on The Strip. As I told Snel during our aforementioned lunch, Gruden will become Las Vegas’ Mike Ditka.

That’s important for the Raiders as they ramp up Personal Seat License (PSLs) sales, brand sponsorship deals, and deepen their already active involvement in the community in both Southern Nevada, and in Northern Nevada. He’s the perfect salesman and there’s no one better suited to pitch and sell the Raiders to the transplants that call Las Vegas home.

Expect Gruden to build his brand – in addition to aiding the Raiders – even larger here in the Silver State. You’ll see Gruden restaurants and other brand extensions that will solidify his long-term role with the team and in Las Vegas. This is why his deal to return to Oakland – at a reported $10M a year for 10 years – is just scratching the surface for him. It also explains why it’s much more than an investment in a coach for the team. It’s an investment in so much more as the team prepares for its new home.

Somewhere, a few years down the line, I expect Snel and I will meet up to talk about the success of both of our media outlets. It will probably go something like this:

“Hey Alan, it’s Scott. You want to grab a bite for lunch today?”

“Sure Scott. Where do you want to meet?”

“Sounds perfect,” Alan will respond. “Where?”

“Let’s meet at Gruden’s Grinders over on St. Rose Parkway.”

Yes, the brand that is Jon Gruden is about to help reshape the future of the Raiders, and Las Vegas, in ways that will be far reaching.