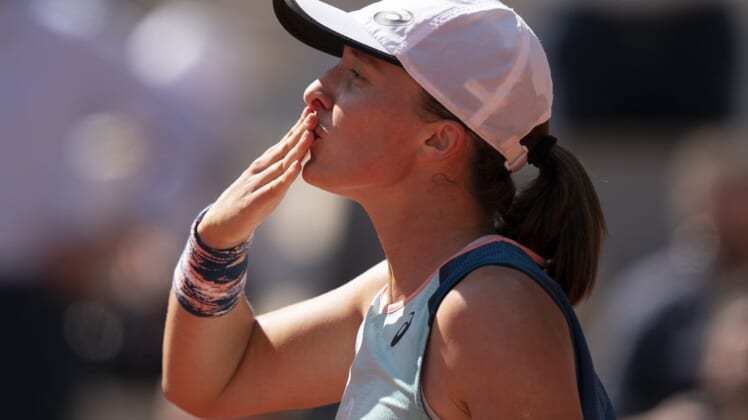 Top-seeded Iga Swiatek received a little boost from Led Zeppelin to take the next step on her stairway to tennis heaven on Thursday.

Swiatek listened to music from the legendary rock band before inching closer to her second French Open title in three years, courtesy of a 6-2, 6-1 win over Russian Daria Kasatkina in a semifinal match in Paris.

The victory was the 34th in a row for Swiatek, who matched Serena Williams for the second-longest such run in the WTA since 2000.

Should Swiatek emerge victorious in Saturday’s final at Roland Garros against No. 18 Coco Gauff, she would equal Venus Williams’ mark of 35 straight wins — set in 2000.

She also would become just the fourth woman in the Open era to win multiple French Open titles at age 21 or younger, joining Monica Seles (three), Steffi Graf and Chris Evert. Swiatek, who also won the French Open title in 2020, turned 21 on Tuesday.

Either way, youth will be served at the French Open. Gauff, 18, advanced to her first-ever final in a Grand Slam tournament with a 6-3, 6-1 win over Italian Martina Trevisan. The American hasn’t dropped a set in the French Open.

“There’s no words to describe it,” Gauff said in her on-court interview after the match. “I’m just super happy right now … I have no words really. I’m just shocked.”

Swiatek said listening to music relaxes her before big events. She’ll need to keep the headphones on until Saturday.

“I try to treat every match the same way, and if I realize this is one of the most important matches of the season it stresses me out,” Swiatek said of her mindset before facing Kasatkina. “I’m really focused on the task, and I’m listening to music when I work out.”

When asked what band caught her ear on Thursday, Swiatek didn’t miss a beat.

“Led Zeppelin, it really (was) pumping me up so I can start with being proactive. I use everything to help me.”

Swiatek overcame splitting the first four games of the first set to take control of the match. She benefited from 22 winners and took advantage of 24 unforced errors from the 20th-seeded Kasatkina to end the match in 64 minutes.

Swiatek has won her past five tournaments and hasn’t lost a match since February, versus 2017 French Open champion Jelena Ostapenko of Latvia. The native of Poland has won 54 of her past 56 sets, with only setbacks against Liudmila Samsonova of Russia and Qinwen Zheng of China preventing her from a perfect run in that stretch.

As for Gauff, she capitalized on six of 11 break opportunities and 36 unforced errors from Trevisan. She won 61 percent of total points.

Should Gauff win on Saturday, it would be her third career singles title.

She became the youngest American woman since Serena Williams to get to a Grand Slam final.

“Words can’t describe how much she meant as an athlete, as a person to me. I probably even wouldn’t have picked up a racquet if it wasn’t for her in or Venus Williams,” Gauff said.