The Answer to the Carr Question? 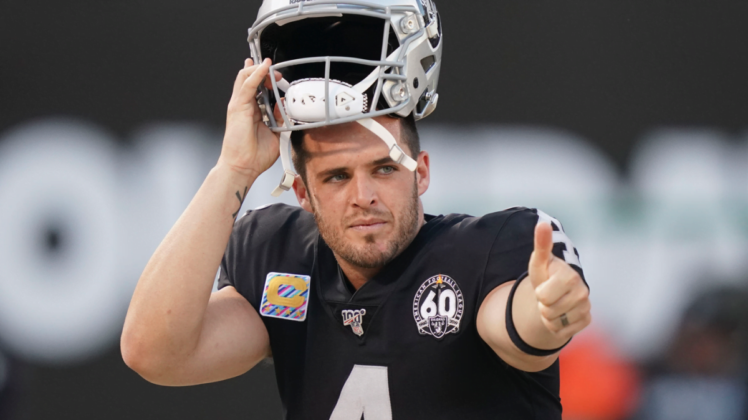 While fans dig in their heels and are seemingly divided right down the middle on the future of Raiders quarterback Derek Carr, there is some middle ground and a solution to benefit the team, the player, and the fans.

I can state emphatically: most of you won’t like this column.

You’ve already made up your mind about Derek Carr and no matter what anyone says (especially some writer and radio host), you’re not moving from your view.

That’s your right and you can go on picking battles on Twitter or sending unnecessary and inappropriate messages to his detractors and supporters.

I’m here to tell you, there is some middle ground.

We discussed the Carr question on yesterday’s Silver and Black Today on CBS Sports Radio 1140 and heard points made on both sides.

My solution is pretty simple and has historic relevance when it comes to Raiders quarterbacks: they should acquire another quarterback (a veteran or young draft pick) to compete with Derek Carr.

As I have said for the last six weeks, I believe Derek Carr will be the starting quarterback for the Las Vegas Raiders this year. Even though that is most likely the scenario that will play out, I do believe athletes are better when they are pushed and motivated through competition. For that reason, I believe bringing in another quarterback is the answer.

Now, before you all tell me you’ve seen enough from Carr and don’t think he can do the job, I don’t think that’s necessarily fair. I’m not here to make excuses as it’s professional sports. Carr and his teammates make a lot of money to play a game and the bottom line isn’t stats or likability, it’s winning.

A team’s fortunes rely heavily on their quarterback play in the NFL. That doesn’t mean when a team wins or loses the quarterback gets all the glory or all the blame.

Yet, there’s great historical reference to why the Raiders should bring in someone to push and compete with Carr at QB. let’s look at the history of the Raiders at the position and how – by design – Al Davis encouraged it.

Here’s a look at the Raiders quarterbacks over the years and their backups brought in to push and compete:

Bringing in a qualified veteran, or talented rookie, to compete with Carr is not a negative and should not be viewed as so. It doesn’t mean you’ve given up on your starter and it doesn’t mean you don’t have confidence in him. It creates a competitive environment by which players often find their best selves while being pushed.

While coach Jon Gruden doesn’t have a history of this as a coach with the Raiders (in his first stint when Rich Gannon was injured, the Raiders didn’t have a qualified vet to replace the MVP), he has done it throughout the roster at other positions. Why not quarterback?

Again, there are arguments for and against Carr as the long-term quarterback for the Raiders. The debate surrounding it shouldn’t be contentious. Instead, if Gruden and general manager Mike Mayock have similar questions many of us do, bringing in another quarterback to challenge the starter could be good for everyone.

That’s not an attack on Carr nor is it dismissing some of his critics who make valid points. Instead, it seems like a prudent action based in Raiders and NFL history.

What do you think? Answer below: