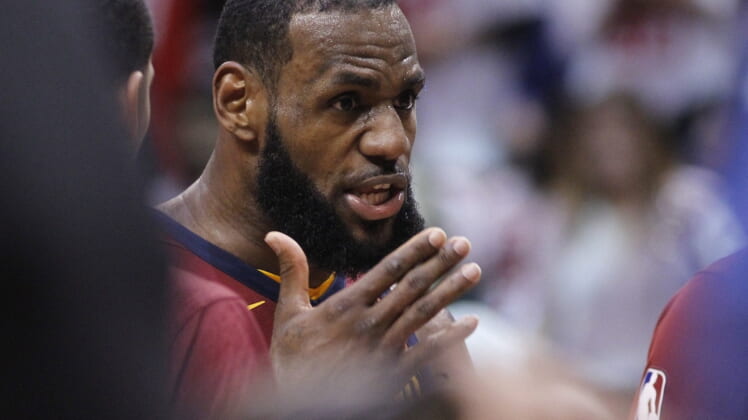 Much like his entire career, LeBron James’ postseason performance thus far in 2018 has been highlighted by awe-inspiring individual performances. It really is something to behold.

During Game 1 of his Cleveland Cavaliers conference semifinals series against Toronto on Tuesday, James brought that to an entirely new level. It included him putting up 26 points, 11 rebounds and 13 assists in the surprise road win.

It’s also the second consecutive Game 1 that James has put up a triple-double, joining himself in some rather elite company.

King James is averaging 33.4 points, 10.1 rebounds and 8.4 assists in 42 minutes of action thus far in the playoffs. You read that right. An average of 42 minutes per game. At 33 years old, it just seems that James is getting stronger as his career moves along.

His importance to the Cavaliers is second-to-none of any player in the modern history of the NBA not named Michael Jordan. Take this year’s playoffs as a recent case study of that. Cleveland boasts a plus 23.3 defensive rating with James on the court. And while the Cavaliers are being outscored by two points with James on the court in eight playoff games, they’re minus-39 when he’s sitting on the bench. Yes folks, that’s a negative 39-point differential in 42 minutes. Then there’s this crazy stat from Round 1 to consider.

We have no real reason to believe that Cleveland will contend for an NBA title when all is said and done. This is among the least-talented teams James has headed since his first run with the Cavaliers. It’s still absolutely shocking to see what the game’s best player continues to do on a consistent basis.

Debates will continue to rage between James and Stephen Curry, especially after the Warriors’ star returned to the court in epic fashion Tuesday night. Curry is among the most impactful offensive players the game has ever seen. But what James does on both ends of the court is something we’ve likely never seen in modern NBA history. And yes, that includes MJ himself.

It truly is stunning. And we have to enjoy it while it lasts.