There are two kinds of players coming out of the 2016 NFL Draft this year. There are athletes with football potential, and there are football players with limited athletic potential.

This year, there’s a lack of natural athletes in the draft. So some of these players with football potential will get over-drafted.
The following athletes are the best at their position athletically, but may not be the best football players. Below, I’ve included athletic comparisons only. Nothing is based on on-field play, though in some cases, the on-field play will be on par with their athleticism.

Here is a quick guide for the Speed, Agility, Explosion, INDEX, HP and Torque in Ft-Lb categories listed at the bottom part of the graphic:

Note: Only players with full data sets are being used. For the sake of transparency, and for those who may be curious about where other players ranked, here is a link to all my work in this arena. 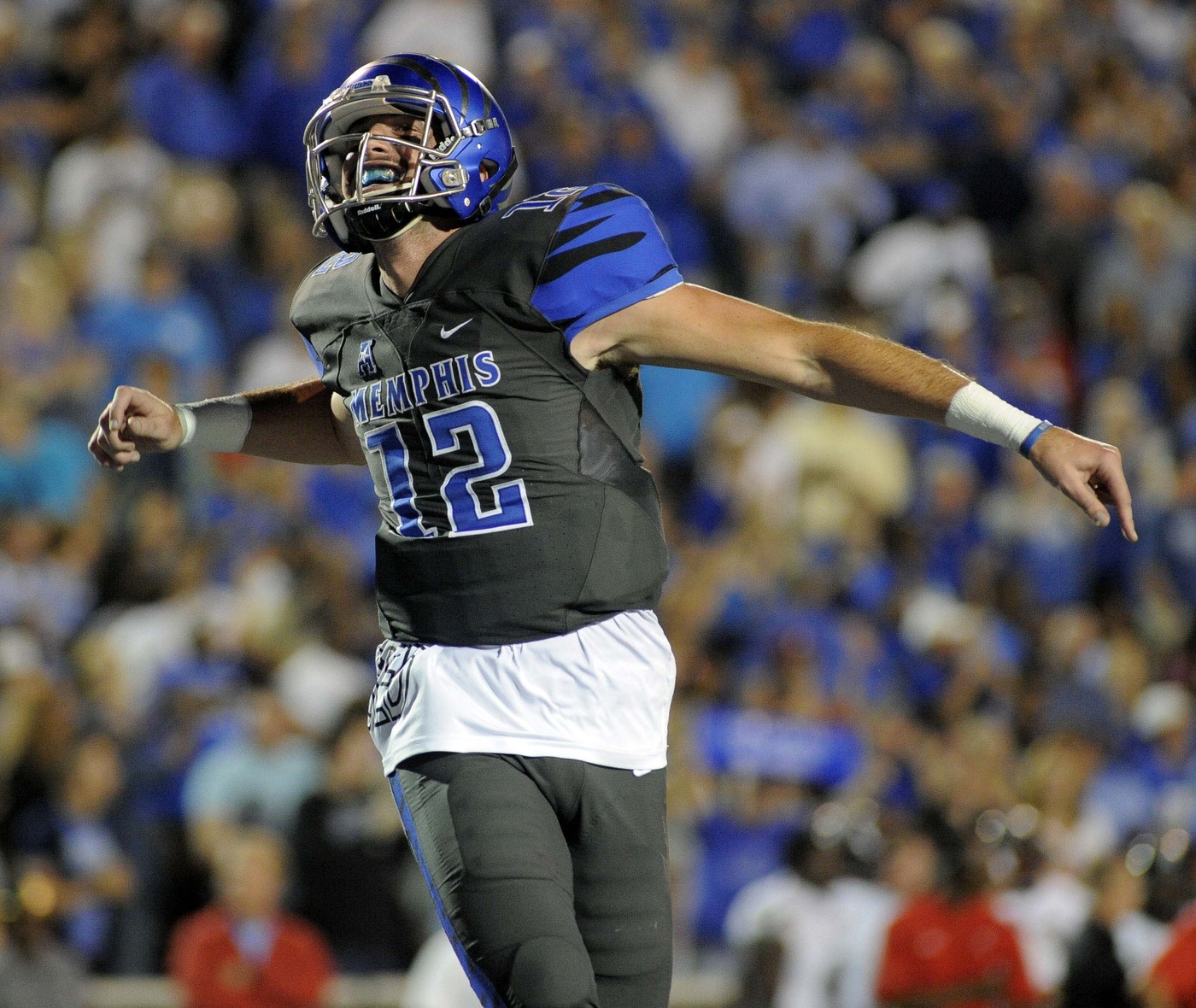 Memphis’ quarterback may not be the best in this draft, but he has arguably the strongest arm out there. Also, as you can see above, he has a very good athletic profile for the position. His comparison of E.J. Manuel isn’t ideal as Manuel has better long speed, but both players are more athletic than the norm for the position.

Out of all running backs in this year’s draft, Derrick Henry is easily the most athletic for his size. Very few 6-foot-3, 247 pound guys move with Henry’s speed, strength and quickness. At running back, there aren’t any great athletic comparisons at his same weight, so dropping down to the cruiserweight class, we found T.J. Yeldon with similar athletic numbers but at about 20 pounds lighter.

While Ezekiel Elliott would be the main back that most would expect here, the one who surprisingly beat him is Darius Jackson out of Eastern Michigan. Jackson has great pure speed and leg strength. Despite having athleticism comparable to future Hall of Fame running back LaDanian Tomlinson, he doesn’t have the film to backup even a draftable grade.

Dan Vitale is almost ideal in terms of what any team would want in a fullback. He’s a solid blocker, and he has pop behind his pads when he’s leading the way. However, he’s also a very good athlete and compares with one of the more athletic fullbacks of all-time: Peyton Hillis.

Easily the most athletic wide receiver in this year’s draft is German wide receiver Moritz Boehringer. He played a similar role in Germany as to what guys like Marques Colston have played in the NFL. However, his only real comparison is another guy who never played wide receiver before going pro against guys who were above a high school level talent-wise either: Matt Jones.

Injuries have plagued Marquez North’s career at Tennessee, but when it comes to his physical talent, it has always been there. Before the injuries, it wouldn’t have been surprising if he had timed in the same kind of ranges that Julio Jones and Donte Moncrief are in. However, he still times well and compares best to Niles Paul — a productive H-back and slot receiver for Washington. 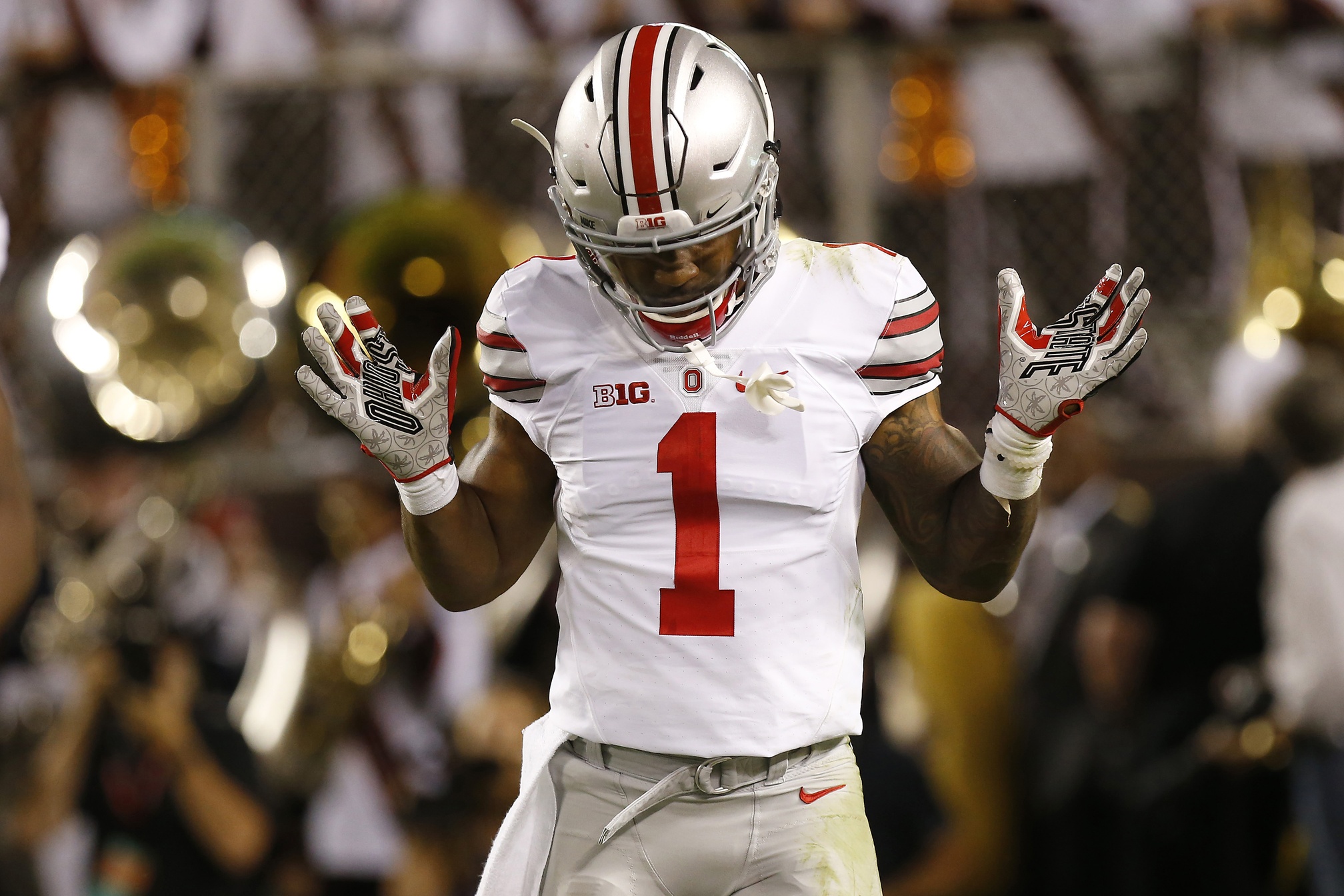 When looking at athletic comparisons for Braxton Miller, Amari Cooper popping up was shocking to me. Miller and Cooper are definitely comparable as athletes though. The question is how long it will be as to when Braxton finally turns into a solid NFL wide receiver. Miller has a higher ceiling than given credit for based on this information, though.

At tight end, taking someone who can play more of an H-back role makes a bit more sense. You can teach guys who are willing to block and are a bit heavy framed like Devon Cajuste how to play tight end (see: Jacob Tamme). Cajuste is the most athletic tight end in a weak draft for the position. His comparison to Dennis Pitta isn’t a horrible for his career, as long as he stays healthy.

The most athletic left tackle in this year’s draft is easily Jason Spriggs. He’s quick laterally and has great footwork. He also has solid length with his nearly 6-foot-6 frame and 34-1/8″ arms. When building a prototype left tackle, he’s right there. Athletically, he compares most favorably to Ryan Schraeder of the Atlanta Falcons—who has left tackle athleticism but plays right tackle in Atlanta.

Some guards have great athleticism and can play in either a power-blocking scheme or a zone-blocking scheme. Connor McGovern has the nastiness and quickness to do both. His comparison with Allen Barbre on the surface seems like it’s knocking him at first, but Barbre honestly is a very athletic player for guard.

At center, athleticism is more important in a zone scheme than in a man scheme due to the close quarters. However, Jake Brendel has shown proficiency in both schemes. Brendel, much like Chris Myers, has more length than the average center. But at the same time he’s equally as quick and has similar functional strength.

Joe Thuney is the most athletic guard in this year’s class, but his best fit in the NFL might be at right guard. He played left tackle, left guard, right guard and right tackle for the Wolfpack and showed the athleticism to play even left tackle at the college level. However, just like his athletic comparison Justin Pugh, he’s a much better fit for guard due to a lack of tackle length.

At right tackle, power is definitely needed, but quickness to handle sight-side pass rushers is also of the utmost importance. Brandon Shell has a nice mix of both. Athletically, he’s similar to Demetress Bell, a former left tackle for the Eagles and Bills. However, unlike Bell, he’s got better upper body and functional strength.

Nose tackles tend to be bigger than guys like Javon Hargave and his 309 pound frame. Hargrave has quickness, strength and the coveted ability to eat double teams on the inside of the line. His comparison to Roy Miller stops there, though. Miller is more technically sound, and he has shown an ability to help elevate defenses despite being an average talent.

The kind of quickness from someone who is 6-foot-6 and 285 pounds that Bronson Kaufusi has is rare. So rare that the closest player to him historically is a Pro Bowl-level talent like Cameron Jordan. Kaufusi is much more raw coming out than Jordan was, but as a base end in a 3-4 defense he should be able to eat doubles in base and collapse the pocket inside.

Connor Wujciak is a late-round talent because he doesn’t have a great fit in every scheme. He has two techniques that he can do well, and they are both ones that he attacks and controls a gap. Like Jay Ratliff, he’s going to be a late-round pick. But if he can put it all together, he has the explosion off the line to be an impact player for whoever takes him. 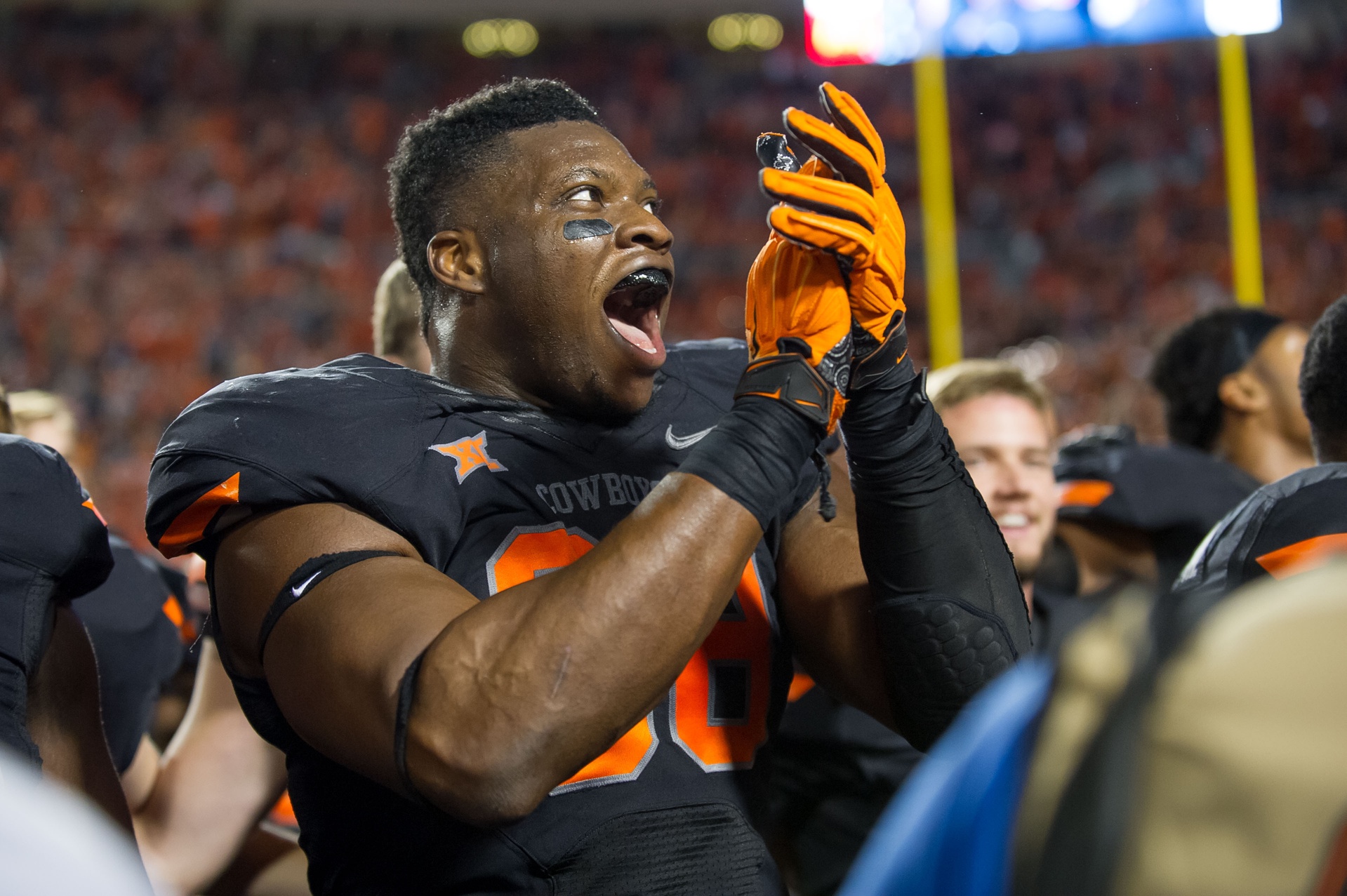 When looking for a 4-3 base defensive end, length, strength and quickness are imperative traits. Emmanuel Ogbah fits the prototypical athlete for the role and compares very favorably to Pro Bowl defensive end Carlos Dunlap. Ogbah doesn’t have the same kind of talent that Dunlap has shown in the league, but if his potential blooms anywhere close to Dunlap’s, he’ll be worth a second-rounder.

At LEO, athletic talent is imperative. Speed off of the edge is important, and with guys like Leonard Floyd, you have that in spades. Initially, Dion Jordan looked like a good comparison, but Mathias Kiwanuka is actually better because of how similar they are on the field. Floyd’s length and athleticism will be what helps him the most to make an impact early.

At 3-4 outside linebacker, speed coming off the edge is important, but density is just as important. Having athletes that might be a little bit shorter with less length but more leverage and speed is ideal for the position. Tyrone Holmes is underrated coming out of Montana, but his athleticism is comparable to Atlanta’s Brooks Reed, who had a good career as a 3-4 OLB in Houston.

At linebacker in today’s NFL, elite coverage ability and athleticism has become the norm. Nick Vigil at middle linebacker can attack the seams, has good range and shows enough physicality in the run game. He compares very favorably as an athlete to David Thornton, a former starting inside linebacker for the Colts and Titans.

Darron Lee is one of the most athletic linebackers out there this year. His straight-line speed and athletic profile compares more to a safety that’s got a big more weight on him. Bobby Wagner is his best comparison as true athletes. Lee isn’t nearly as physical as Wagner, but he’s a great athlete and profiles best as a weak-side linebacker in the 4-3. 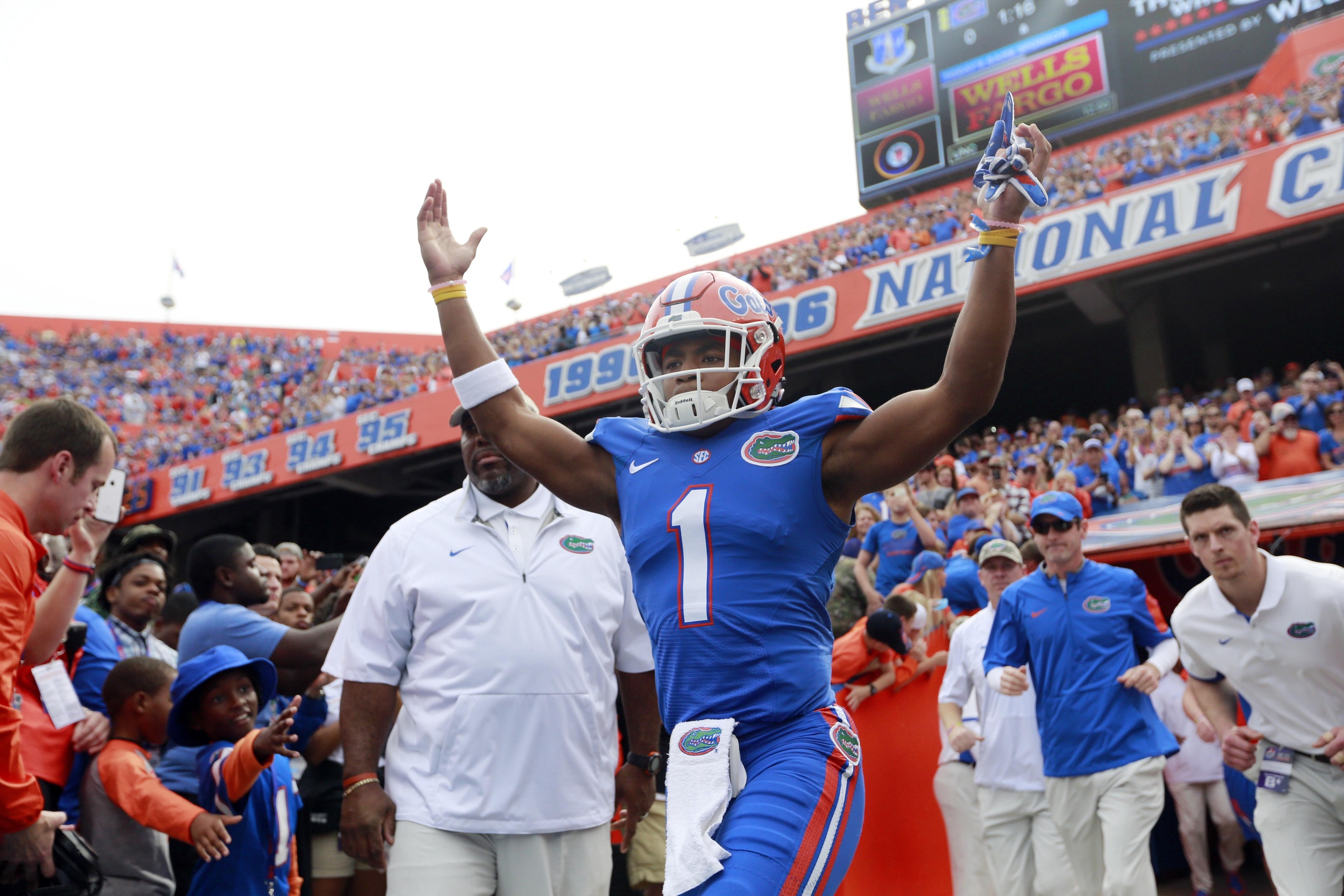 Raw athleticism at cornerback is very crucial. Vernon Hargreaves isn’t the insane athlete that Desmond Trufant was in 2013 or Darrelle Reveis was in 2007, but he’s still an above-average athlete for the position with great instincts and the best athlete for the role in the draft. Terrence Newman was a similar player coming out of college, but had way better long speed.

This year’s cornerback class isn’t as athletic as some years in the past. Xavien Howard, it’s second-most athletic player, has a great athletic profile that compares to a fringe Hall of Fame talent in Chris McAlister. The former Ravens corner and the Baylor player have nearly identical numbers outside of the straight-forward and top-end speed.

While he would easily be the best athlete at either cornerback or safety, Jalen Ramsey is a guy who needs to move around to multiple spots. As a nickel defender, he can bring versatility to a defense, and his Eric Berry-level of speed, strength and size will give offensive coordinators fits as they try to game-plan for him.

Kevin Byard has great athleticism to play the deep third of the field. His top-end speed and agility are shown off pretty easily both on the field and in his athletic testing. Similar to Devin McCourty, Byard can make players around him better by taking away the deep ball and allowing the underneath coverage to play more aggressively.

The best athlete that fits at strong safety in this draft isn’t an ideal size for all schemes. But similar to Michael Griffin, Justin Simmons has an athletic profile normally suited for a cornerback.  Both players are right around 200 pounds and have good straight-line speed. But their short area quickness is where they really show their athletic talents.