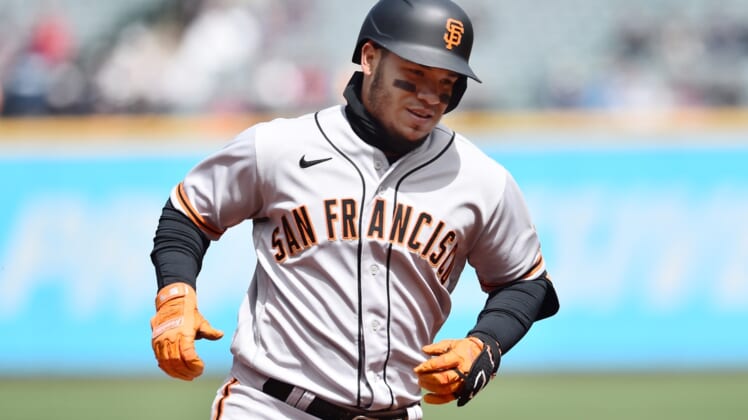 San Francisco second baseman Thairo Estrada homered and drove in four runs to lead the visiting Giants to their fifth consecutive victory, 8-1, and a series sweep over the Cleveland Guardians on Sunday.

Estrada came into the game batting .207.

He jumped on Guardians starter and loser Aaron Civale (0-1, 6.14) for a two-run homer in the second inning. Wilmer Flores doubled off the center-field wall and Estrada followed with his second home run of the season.

Giants left-hander Alex Wood (1-0, 1.93) pitched five innings for the win. He allowed four hits, no runs and two walks. He struck out five.

San Francisco opened up a 4-0 advantage in the fourth inning. Guardians first baseman Bobby Bradley, who hadn’t played in the previous seven games, had a hand in costing his team two runs with his glove.

Joe Pederson started off the inning with a single and Brandon Crawford also was credited with a single when his grounder to Bradley got caught in the webbing of his glove. Flores followed with a walk to load the bases with one out.

Estrada’s double-play grounder was fielded by Amed Rosario, who went to second for the second out. Second baseman Owen Miller’s relay to first skipped under Bradley’s glove for a throwing error, which allowed Pederson and Crawford to score for the 4-0 bulge.

Things got even worse for Cleveland in the sixth inning. Pederson singled and stole second base off reliever Eli Morgan. He came home on Estrada’s double. Steven Duggar followed with a sharp single off Miller’s glove for a 6-0 advantage.

Brandon Belt belted a two-run homer in the seventh for an 8-0 lead. It was his third homer of the season.

Guardians catcher Austin Hedges recorded his first hit in his first 20 at-bats this season in the seventh, which drove in Rosario and got Cleveland on the board 8-1.

The last time that the Giants swept an American League team on the road was June 17-19, 2016, at Tampa Bay.

Before Sunday, neither team had scored five of more runs in 15 consecutive games in their series, according to Stats, LLC. It was the longest streak in the majors by any two teams.