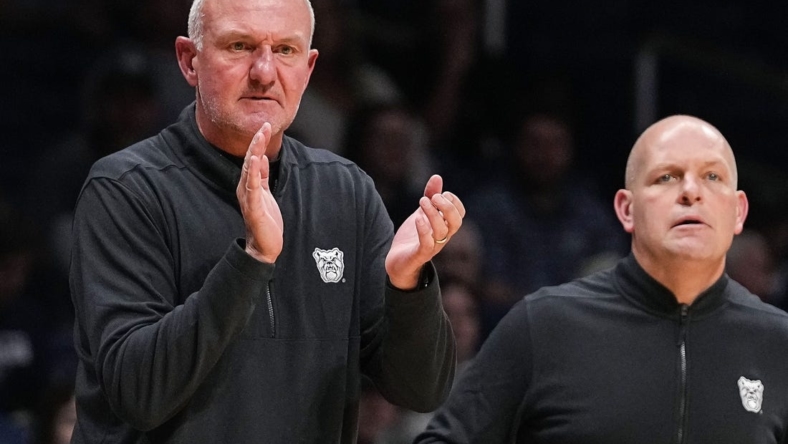 Thad Matta’s return to the college basketball sidelines was a resounding success as Butler rolled to a season-opening 89-53 victory over New Orleans Monday night at Hinkle Fieldhouse.

Six-foot-11 North Carolina State transfer Manny Bates produced a career-high 25 points — highlighted by six dunks — along with 11 rebounds and 3 blocks in 28 minutes for Butler (1-0) as the 55-year-old Matta won his first game as a head coach since parting ways with Ohio State in June 2017.

Johnson swished a 30-footer to open the season’s scoring for the Privateers, but Butler gradually took control with an aggressive man-to-man defense that forced UNO into 14 turnovers in the game’s first 15 minutes.

Harris’ unguarded 3-pointer from the corner gave Butler its first double-digit lead (20-10) with 8:12 left in the first half and forced New Orleans to use its first timeout.

Then Hunter took over by attacking the basket repeatedly. During a four-minute stretch, he drove for a left-handed layup, a resounding lefty slam and a right-handed layup to boost Butler’s margin to 32-16. Bates added back-to-back slams as the Bulldogs carried a 46-21 lead into intermission.

Butler’s lead swelled to 32 points early in the second half as Bates and reserve Pierre Thomas threw down consecutive slams to make it 59-27.

The Bulldogs played without two of their four highly touted transfers — Akron’s Ali Ali and Georgia State’s Jalen Thomas — due to injury. New Orleans big man Simeon Kirkland, who was selected to the Southland Conference’s preseason second team along with Jackson, picked up two early fouls and finished with 4 points and 3 rebounds.