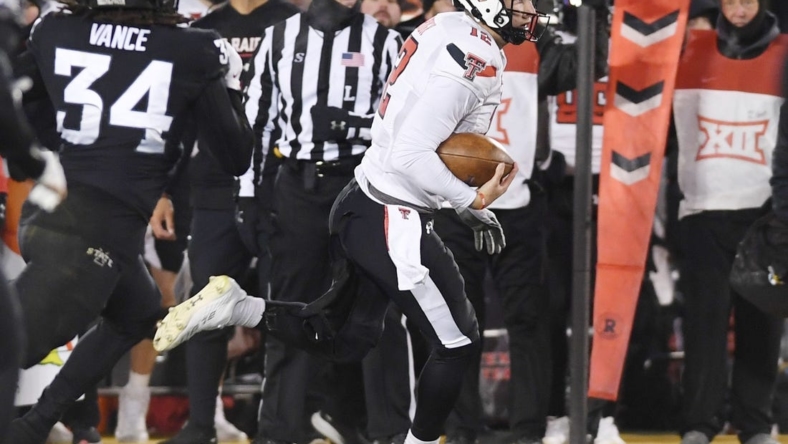 Tyler Shough hit Baylor Cupp with a jump-ball, 4-yard touchdown pass with 6:10 to play to lift Texas Tech to a 14-10 win over Iowa State on Saturday in a Big 12 Conference game dominated by defense in frigid and windy Ames, Iowa.

Shough passed for just 141 yards, but 43 of them came in the Red Raiders’ winning drive after they had fallen behind. He lofted a pass to Cupp, his 6-foot-6 tight end, for the score that sent Texas Tech (6-5, 4-4 Big 12) into bowl eligibility for the second straight season.

Iowa State (4-7, 1-7) lost its second straight game, fell to the cellar in the conference standings and will not play in a bowl for the first time since 2016.

Hunter Dekkers led the Cyclones with 294 yards passing, with 101 of those going to Xavier Hutchinson. Iowa State outgained Texas Tech 422-246 and possessed the ball for more than 36 minutes.

The Red Raiders struck first, getting a 1-yard touchdown run from backup quarterback Donovan Smith at the 12:23 mark of the second quarter to culminate a 96-yard, 14-play drive that used 5:04 of the clock.

Iowa State responded with Drake Nettles’ 36-yard field goal on the ensuing possession after a 13-play, 63-yard march. Nettles missed from 30 yards out after Texas Tech fumbled on its opening possession and had another attempt blocked, this time from 34 yards away, on the final play of the first half.

The Cyclones finally broke through early in the fourth quarter when Dekkers hit Easton Dean with 24-yard scoring catch and run to give Iowa State a 10-7 lead.

But Texas Tech immediately answered, driving 77 yards in 13 plays that included a fourth down conversion at its own 32, before Shough’s winning touchdown pass to Cupp.