The Texas Rangers are multiple years away from merely contending for the American League playoffs. With that said, there are rumblings that they plan to be active on the MLB free agent market this offseason.

The latest scoop comes from Evan Grant of The Dallas Morning News who brings to light league speculation that the Rangers could add $100-plus million in payroll this offseason. Texas needs help across the board, which means adding impact infielders and outfielders, as well as reliable starting pitchers.

There are countless free agent possibilities for a team with payroll flexibility — albeit the Rangers have finished last in the AL West in back-to-back seasons. With that in mind, here are five savvy free agent targets for the Rangers.

Michael Conforto to the Texas Rangers

Conforto is coming off an uncharacteristic season at the plate; that could partially bring down his free agent price tag. Furthermore, Conforto would be a tremendous pickup for manager Chris Woodward’s ballclub.

Conforto is a sturdy and productive two-way player. He’s a plus right fielder with extensive experience playing left and center field, too. The former New York Mets’ outfielder has a smooth, power swing that generates slug.

Conforto is capable of hitting 30 home runs in a season and is entering the prime of his MLB career. He’s someone who can be part of the Rangers’ core, hit in the middle of the order and move around the outfield, if need be. Conforto playing right field moves Adolis Garcia into center on a full-time basis.

Jorge Soler to the Texas Rangers

Soler has power for days. The 2021 World Series MVP is a proven power hitter from the right side and accustomed to being an everyday designated hitter, which he served as in varying parts of his time with the Kansas City Royals. He could assume that same role with the Rangers and/or serve as the team’s fourth outfielder.

It was just two years ago that Soler blasted 48 home runs. His mammoth bat was on full display in the 2021 playoffs, where he played a vital role in the Atlanta Braves’ championship run. In a way, Soler’s pop would replace the power that was sent to the New York Yankees in the form of Joey Gallo at last season’s MLB trade deadline.

Soler bolsters a Rangers’ team that was 26th in MLB in home runs last season (167) while deepening their outfield corps.

Eduardo Escobar to the Texas Rangers

Escobar is a slick hitter from both sides of the plate. Now he hits the open market, poised to be an under-the-radar pickup given the amplitude of star infielders available (Corey Seager, Javier Baez, Carlos Correa, Marcus Semien and Trevor Story). The Rangers make sense for Escobar.

Shortstop Isiah Kiner-Falefa, who was a steady, contact hitter last season, and first baseman Nate Lowe, who drove in a respectable 72 runs last season, are likely in the team’s opening day lineup. Second and third base are unknowns and/or up for grabs. Escobar is adept at playing the aforementioned positions, as well as shortstop.

Escobar is a proven commodity at the plate who generates offense and moves runners across the basepaths. He can play all over the infield while complementing the youth in the Rangers’ offense.

Steven Matz to the Texas Rangers

Dane Dunning had his moments last season and perhaps Spencer Howard and Kolby Allard make strides in 2022. At the same time, the Rangers desperately need rotation help, and Matz would be an ideal addition.

The southpaw is coming off a bounce-back season with the Toronto Blue Jays, where he returned to being a reliable force on the rubber every fifth day, worked out of trouble, and limited home runs (the long ball had been a chronic weakness for Matz).

Last season could be the start of what’s to come for Matz, meaning the Rangers could receive more production than they potentially sign up for. He’d be the Rangers’ immediate ace and is a risk worth taking for their sake.

Carlos Rodon to the Texas Rangers

Rodon had a spectacular season for the Chicago White Sox in 2021, one that would’ve likely seen him be a finalist for the AL Cy Young Award had a shoulder injury not derailed his season. Is signing Rodon a risk? Of course it is, but the left-hander just showcased an ability to be a top-of-the-rotation force.

He blew his fastball past hitters, totaled strikeouts at a high rate and was a force to be reckoned with this season. All the while, he provided considerable length and kept runners off the basepaths at a high level. 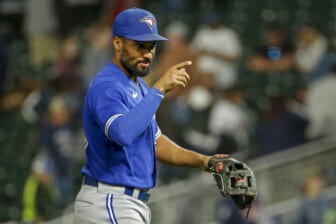 Across 24 starts, Rodon was an ace. It’s a matter of him staying healthy. The Rangers have money to spend, and the reward for hitting on Rodon makes him a compelling option; he could be the backbone of their pitching staff for the foreseeable future.