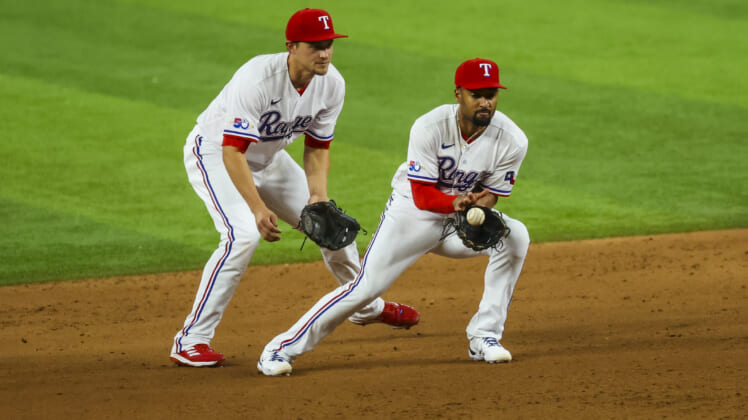 The Texas Rangers were the boldest spenders of the MLB offseason, specifically spending $500 million on infielders Corey Seager and Marcus Semien. Rotting at the bottom of the American League for five seasons, Seager and Semien were brought in to give the Rangers a sniff of respectability.

To date, both players are vastly underperforming. In Seager’s case, he has underwhelmed. As for Semien, he has been one of the worst hitters in the sport. This isn’t what the Rangers signed up for, but it’s also not what they’ll end up getting for their money. It’s merely an awful start.

Here’s why the Rangers shouldn’t be worried about their star infielders.

It sounds cliche to say that former All-Stars are capable of better performance, but that’s truly the case for the Rangers. Seager isn’t a middle-of-the-pack run producer, and Semien isn’t a .173 hitter. They will perform better as the season progresses.

Yes, Seager has endured a handful of injuries over his MLB career and one could argue a $325 million contract was an overpay given his track record in that regard. On the other hand, this is one of the best shortstops in the sport. Seager has a long and effective swing from the left side. He generates power, slugs at a high level and is battle-tested in postseason play.

Semien has had an up-and-down career. That said, he has been a high-level player for the better part of his prime. Semien has a compact power swing from the right side, can swipe bags and is adept at playing second and third base, as well as shortstop. The veteran infielder has played his best baseball of late, finishing top three in American League MVP voting twice from 2019-21.

Both players are lethal hitters who frequently put the ball in play, field their positions well and are two of the best infielders in the sport. They’re the Rangers’ best everyday players from a sheer talent standpoint. Seager is 28, nearing his prime. Semien is 31 with plenty left in the tank.

If both players were hitting at their current clips in August, it would feel like a slump. That slump is coming out of the gate, perhaps partially due to the sport’s delayed start time in the wake of the MLB lockout.

If the Rangers were told they’d be 17-19 back in March, they would’ve been satisfied. In thought, that would mean their offseason additions, which also include Jon Gray and Kole Calhoun, were making a difference. Instead, Texas is 17-19 with their two best players struggling to hit their weight. What happens when Seager and Semien begin hitting their stride?

Seager and Semien are supposed to be the bedrock of manager Chris Woodward’s lineup. They also serve as the team’s vital double-play duo. At full force, they theoretically complement developing hitters and/or players who have flashed the ability to make hay at the plate like Adolis Garcia, Nathaniel Lowe and Nick Solak.

The Rangers are winning games with their best players, which includes most of their bright spots from last season, off to anemic starts. Woodward’s pitching staff is what’s keeping this team afloat. Martin Perez is off to an astounding start, posting a 2.01 ERA across his first seven starts while 27-year-old right-hander Dane Dunning is making more strides.

The Rangers have a handful of young pitchers in their starting rotation (Dunning, Taylor Hearn and Glenn Otto). These pitchers are getting their first licks at the big-league game and in Dunning’s case making progress. All the while, the likes of Joe Barlow, Brock Burke, Matt Moore and a handful of others have been electric out of the bullpen.

Texas has won 11 of its last 16, is grinding out victories and has upside across the board. Seager and Semien performing to their career tendencies and at least a couple more position players picking up the pace keeps the Rangers a competitive opponent.

Texas Rangers are on a prosperous path

The early returns of this season have been raw and confusing for the Rangers. It feels like they’re 10 games below .500 because of how much their offense has struggled as a collective whole and Gray being off to a nightmare start. Yet, record-wise, they’re improving.

Hearn and Otto can only get better with more outings. Top pitching prospects Jack Leiter and Cole Winn could potentially make their MLB debuts this season. At the plate, Garcia is coming off a season where he flaunted a power bat. Lowe is coming off a breakout season headlined by driving in 72 runs. Mitch Garver has been a formidable power-hitting catcher. That said, Jonah Heim has been superb in Garver’s place, hitting a team-best .300.

Now, Seager and Semien have to play better. Once again, though, if they’re hitting at their current level in the summer heat, the question would be when are the two of them going to snap out of their respective slumps, rather than whether they were wasted free agent signings.

Even if the pair of infielders perform at mere plausible levels, it’s an upgrade over what the Rangers had last season and what they have in the present. The 2022 MLB season is about the Rangers providing the team faithful with reason to believe they can compete for the playoffs in 2023.

Texas is on a prosperous path and has upside across the board. The focus should be on player development, as opposed to if and when their free agent signees will right the ship.