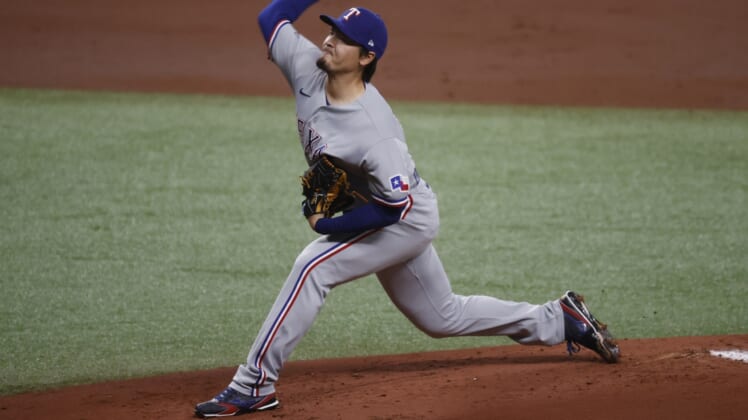 Making his third big-league start after pitching six seasons in his native Japan, the 28-year-old Arihara (1-1) baffled the home side with an array of pitches and yielded just three hits. He struck out five and did not issue a walk.

David Dahl and Adolis Garcia each added a pair of RBIs with a double and a triple, respectively, in Texas’ four-run seventh inning.

Left-hander Josh Fleming (0-1) allowed four hits over five innings in his season debut but did give up a solo homer to Lowe. The rookie struck out two and walked two in his first career loss.

Yandy Diaz and Manuel Margot had two hits each and Brandon Lowe hit his first homer for the Rays, who slipped to 3-3 on the homestand.

A member of the Rays last year, lefty Nate Lowe went deep against Fleming leading off the second, making it 1-0 on a 2-2 curveball slashed the other way.

It was Lowe’s fourth long ball to go along with 15 RBIs in the first 12 games.

Following a leadoff single by Diaz and a double by Joey Wendle in the second, Arihara got out of it by getting a shallow flyout from Margot and strikeouts of Yoshi Tsutsugo and Mike Zunino.

With the bases loaded in the sixth, no outs and reliever Chris Mazza pitching, Tampa Bay appeared to get a double play at home plate, but the umpire called the sliding Dahl safe.

However, the call was overturned after Tampa Bay challenged and replays showed Dahl failed to touch home, and Mazza got Nick Solak to ground out to keep the deficit 1-0.

Dahl doubled down the right field line on an 0-2 pitch from Mazza for a 3-0 lead in the seventh.

Garcia then launched a shot off the railing above the right-center field fence to score Dahl and Joey Gallo, and Garcia circled the bases and was called safe at home on a head-first slide with an apparent inside-the-park homer for his first career homer.

But the Rays challenged the call, and Garcia was called out and credited with a triple.