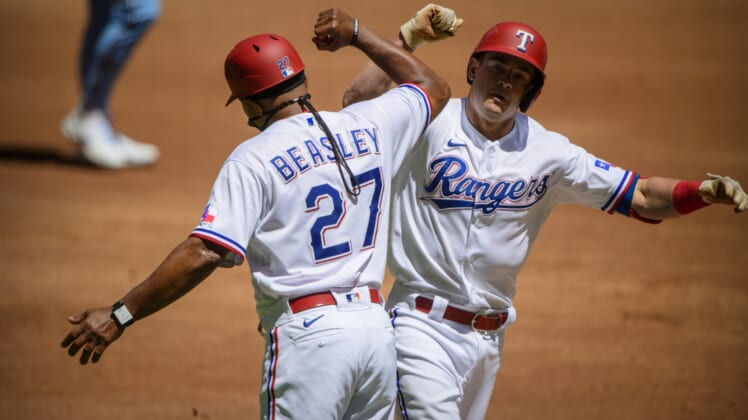 Gibson (1-0) allowed no runs, six hits and one walk in six innings as the Rangers won the rubber match of the three-game series after dropping the opener.

Ian Kennedy pitched around a single in the ninth and had three strikeouts to earn his second save of the season.

After striking out the side in the first inning, Ryu allowed a leadoff home run to Solak in the second. Solak swatted an 0-1 fastball into the left-field seats.

The Rangers scored another run in the second on an infield single by Jose Trevino, a groundout to third and an RBI, broken-bat single by Leody Taveras.

The Blue Jays loaded the bases with one out in the fifth inning on Joe Panik’s single, Danny Jansen’s double and Semien’s walk, but Cavan Biggio grounded to shortstop to start a double play.

After pitching around a single in the sixth, Gibson was replaced in the seventh by Josh Sborz, who set the side down on seven pitches.

Trevino and Eli White singled to start the bottom of the seventh. Taveras bunted to first and Vladimir Guerrero Jr. threw to third base. Trevino was originally called safe, but the call was reversed on video review after a Blue Jays’ challenge. Charlie Culberson struck out and Isiah Kiner-Falefa grounded out to third to end the inning.

Matt Bush allowed Semien’s third homer of the season to lead off the eighth. Bush pitched around Bo Bichette’s one-out infield single to complete the inning.

Tim Mayza replaced Ryu in the eighth. He allowed an infield hit to Joey Gallo and hit Solak with a pitch before being replaced with two out by Rafael Dolis, who retired Trevino on a fly to right.