Texas Rangers eager for fans in home debut vs. the Toronto Blue Jays 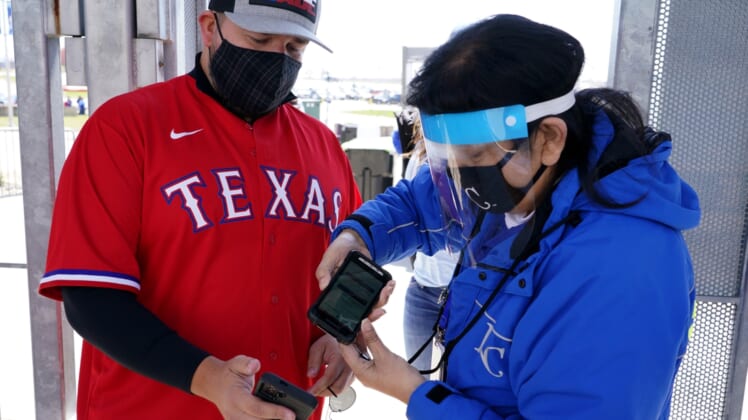 The Texas Rangers are expecting a capacity crowd when they play the Toronto Blue Jays at Arlington, Texas, in their home opener Monday afternoon, a dramatic departure from the norm during the COVID-19 pandemic.

“We know there is going to be a lot of attention on us,” Rob Matwick, the Rangers’ executive vice president of business operations, told the Dallas Morning News.

During the pandemic-shortened 2020 season, there were no fans allowed at games, and attendance was limited for spring training games this year and so far during the regular season.

“It’s definitely going to be different,” said left-hander Steven Matz, who will start in his Blue Jays debut and his first career appearance against the Rangers. “But it’s a good glimpse of what’s here to come in the future for the whole country, I think, so I’m excited about that. It’s going to be really fun. I’m excited to compete, especially to have the energy of the fans.”

Not everyone agrees with the decision.

“That’s a decision they made,” President Joe Biden said in an ESPN interview Wednesday. “I think it’s a mistake. They should listen to Dr. (Anthony) Fauci, the scientists and the experts. But I don’t think it’s responsible.”

Capacity at Globe Life Field is approximately 40,300. Fans will be required to wear masks except when eating or drinking.

The Blue Jays are going into the series on a positive note after defeating the host New York Yankees Sunday in the rubber match of a three-games series.

The Rangers defeated the Kansas City Royals 7-3 Sunday to avoid being swept in a three-game road series.

Right-hander Mike Foltynewicz, signed as a free agent, will start the home opener in his Rangers debut.

“Long story short, I’ve just been through a lot very quickly, and just the trust the Rangers have entrusted in me,” Foltynewicz said last week. “Just excited to have me. That puts my energy way up there.”

Foltynewicz made just one start in 2020, allowing six runs in 3 1/3 innings for the Atlanta Braves and was designated for assignment.

Related: If you’re a fan of the Rangers, check out #Rangers rumors, rankings, and news here.

The Blue Jays obtained Matz in an offseason trade with the New York Mets. He was 0-5 with a 9.68 ERA for the Mets last season in nine outings (six starts).

He made a good impression at spring training with his new team, going 2-0 with a 1.76 ERA over 15 1/3 innings, striking out 15 against just two walks.

“I feel confident now with what I’m trying to do out there,” he said on Sunday. “I was constantly tinkering and changing things when I was with the Mets.”

The Rangers allowed 25 runs in losing their first two games of the season to the Royals as they failed to hold a five-run lead in the first game and a four-run lead in the second.

“Everybody hates losing,” Rangers manager Chris Woodward said on Saturday. “We’ve put in a lot of work, especially on the pitching side, but we’ve got to execute.”

Nate Lowe hit a three-run homer for Texas on Sunday and Isiah Kiner-Falefa added three RBIs in going 3-for-4. Lowe has nine RBIs in three games.

In their win at New York, the Blue Jays scored all their runs in the second inning on a solo home run by Vladimir Guerrero Jr. and a two-run shot by Randal Grichuk.