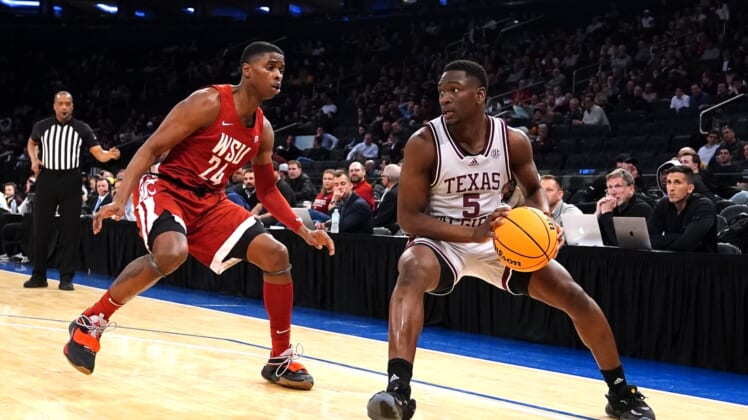 Quenton Jackson scored 18 points and dished out six assists Tuesday night as top-seeded Texas A&M roared into the finals of the NIT with a 72-56 beating of Washington State at Madison Square Garden in New York.

The Aggies (27-12) will play Xavier, which eliminated St. Bonaventure 84-77 in the first semifinal, on Thursday night for the tournament title. The fourth-seeded Cougars finished their season at 22-15.

Tyrell Roberts scored 14 points for Washington State, but leading scorer Michael Flowers was held to 2-of-12 shooting and managed just five points. Flowers broke Klay Thompson’s single-season school record for 3-pointers in the Cougars’ 77-58 win at BYU on Wednesday night, but he missed all five of his shots from distance on Tuesday.

Texas A&M broke this one open with a 27-6 run early in the second half, taking a 66-39 lead when Wade Taylor converted a layup off one of Washington State’s 17 turnovers.

The first 10 minutes won’t appear on any instructional videos unless they have to do with defense or how not to make shots. Washington State needed nearly four minutes to make a field goal, and the score was tied 7-7 nearly 8 1/2 minutes into the game.

But Texas A&M became the first team to find a rhythm offensively. Beginning with Jackson’s layup off a steal at the 10:02 mark, the Aggies rattled off nine straight points, establishing a 19-12 advantage when Jackson converted a three-point play with 6:37 left.

The margin reached 11 when Hassan Diarra drove for a layup with 1:59 remaining, but the Cougars took some momentum into halftime. They scored the final five points, including a putback by DJ Rodman with 54 seconds on the clock that pulled them within 32-26.