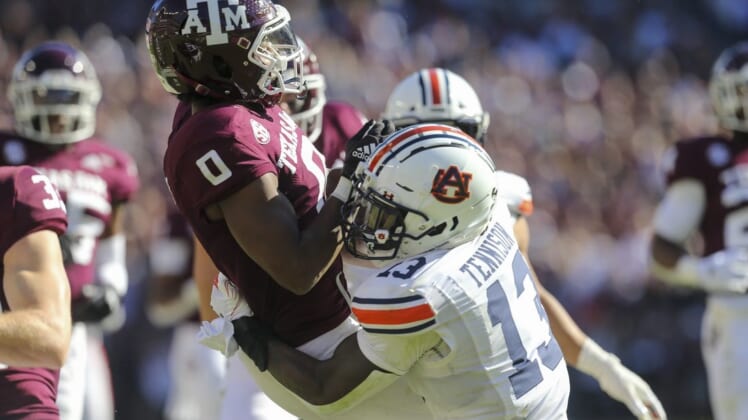 Wide receiver Ainias Smith, Texas A&M’s leader in receptions and touchdown catches as a junior in 2021, was arrested in the early hours Wednesday on suspicion of driving while intoxicated, illegally carrying a gun, and marijuana possession of less than two ounces.

Numerous media outlets reported the arrest, which happened in College Station, Texas, where the university is located. A team captain, Smith had been listed as one of the school’s representatives during Southeastern Conference media days on Thursday.

In a statement Wednesday, the school announced that Smith has been suspended, which follows the athletics department’s policy.

Television station KBTX3 reported that Smith was stopped for speeding, and he did not pass a field sobriety test. He agreed to take a breath analysis test, and in two tests, he was below the .080 legal limit (.066 and .061).

In searching Smith’s vehicle after the arrests, police said they founded a loaded pistol, which he was carrying unlawfully, and a single, rolled joint.

Smith led the team with 47 receptions and six touchdown catches, and he was second with 509 yards receiving. In three seasons for the Aggies, he has 112 receptions for 1,321 yards and 15 touchdowns.

Smith has also returned 54 punts, including one for a touchdown, in three seasons, with an average return of 9.7 yards.