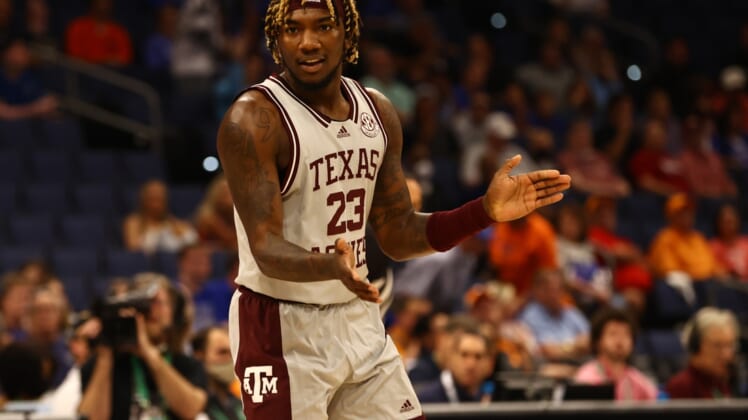 Texas A&M will try to continue making a postseason statement after being snubbed for a spot in the NCAA Tournament when they battle Oregon on Saturday afternoon in National Invitation Tournament second-round play at College Station, Texas.

The winner of Saturday’s game will advance to the tournament quarterfinal against the winner of the VCU-Wake Forest game on March 22 or 23.

The Aggies (24-12), one of the event’s top-four seeds, advanced to the second round via a 74-62 win over Alcorn State on Tuesday. Tyrece Radford led Texas A&M with a 14-point, 14-rebound double-double while Wade Taylor IV and Hassan Diarra added 12 points each for the Aggies and Quenton Jackson hit for 10.

The 24 wins are the most for Texas A&M since the 2015-16 squad recorded 28 victories and reached the Sweet 16 of the NCAA Tournament. The Aggies have captured eight of their last nine games, with their only defeat coming in the Southeastern Conference tournament final against then-No. 9 Tennessee.

The Aggies shrugged off a ragged first half to pull away from the Braves over the first 10 minutes after halftime. Manny Obaseki’s layup at the 19:15 mark of the second half sparked a 10-0 run resulting in a 37-30 lead and Texas A&M never looked back.

The Aggies ran away soon after that, when an 11-2 surge pushed the lead to 19 points.

“We came out slow (Tuesday), but we picked it up towards the end,” Jackson said. “We gave away the first half for sure, but there’s no more lackadaisical from now on. You have to control what you can control. (Playing in the NIT) is still an opportunity, so we have to take advantage of this.”

Oregon (20-14) heads to College Station after an 83-72 winner at Utah State on Tuesday, upsetting the fourth-seeded Aggies. De’Vion Harmon led the Ducks with 19 points, with Jacob Young adding 17 and Rivaldo Soares finishing with a career-best 13 points.

The Ducks forged a 12-5 run to go up 45-42 at the 16-minute mark of the second half and eventually outscored Utah State 30-13 in the first 12 minutes of the second half. Oregon led by as many as 17 and cruised to the finish.

“It’s been a tough year for the guys, so just to see them smiling and feeling good and going on the road … it was good for the guys,” Oregon coach Dana Altman said afterward. “They fought adversity tonight. When things didn’t go our way, we kind of hung in there.”

Oregon won despite playing without point guard Will Richardson, its leading scorer this season, and center N’Faly Dante, both of whom are suffering from non-COVID illnesses.

The Ducks have now won 20 or more games in 12 consecutive seasons, one of only three teams in the country with an active streak of at least a dozen 20-plus victories.