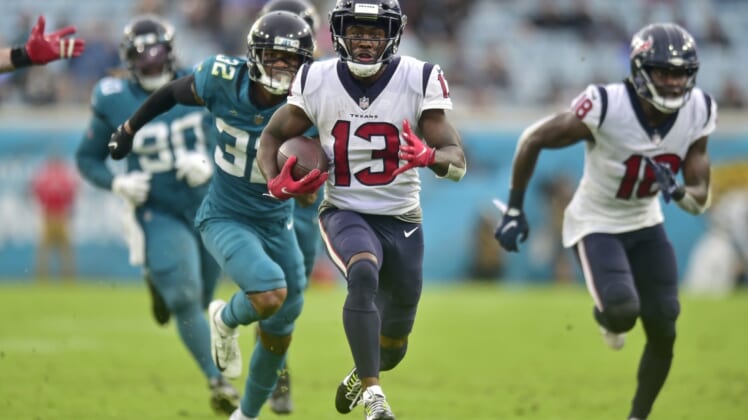 Houston Texans receiver Brandin Cooks was one of three players placed on the team’s COVID-19 list on Wednesday.

Also placed in the protocols were kicker Ka’imi Fairbairn and linebacker Eric Wilson.

The Texans now have 18 players sidelined after testing positive, according to the Houston Chronicle.

Cooks, 27, is enjoying his second straight standout season for Houston. He has 80 receptions for 947 yards and five touchdowns in 14 games. He is aiming for his sixth career 1,000-yard campaign.

Last season, Cooks caught 81 passes for 1,150 yards and six touchdowns in 15 games in his first season with the Texans.

Houston offensive lineman Justin Britt said being diligent is all you can do when trying to avoid catching the virus.

“I feel like you do the best you can to avoid getting COVID, but it’s kind of one of those things that might be out of your control,” Britt told reporters on Wednesday. “But wash your hands, wear your mask, social distance and just kind of tune in to the protocols and what they ask of you.

“If you feel like you need to go test, do so, because we’ve got to protect our families and our loved ones first and foremost.”