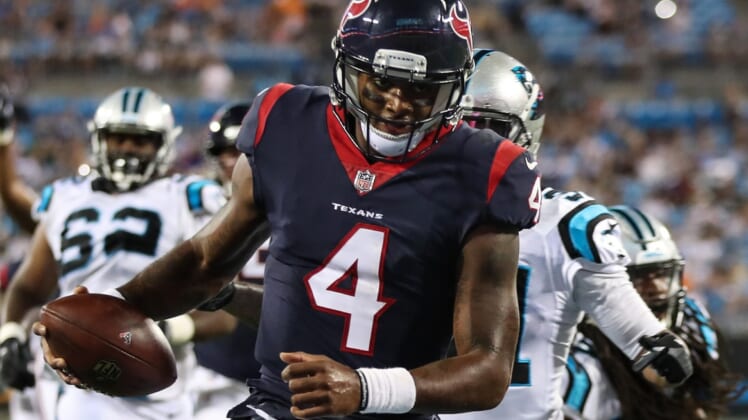 The Houston Texans have been searching for a legitimate franchise quarterback since the dawn of their emergence into the NFL in 2002. According to general manager Rick Smith, that search is now over. Deshaun Watson is that guy, and if he stays healthy he’ll be that guy for a long time.

“Listen, if this guy stays healthy, we have our franchise quarterback,” Smith told NFL.com following the Fall League Meeting in New York, per Ian Rapoport. “I feel confident in saying that.” With a laugh, Smith continued: “We’ve been looking for a while.”

Considering Watson already has some game-worn gear sitting in the Pro Football Hall of Fame, it’s hard to argue with Smith. The general manager also highlighted what we’ve been witnessing since his days at Clemson — Watson is a natural leader who rallies his team to play better.

“My favorite thing about him is his leadership,” Smith said. “His presence. He has an ability to always be calm and you need that. Always under control and in the moment and I love that about him.”

The former Clemson star has also shown he’s capable of being the face of the franchise. He’s made a huge impact already in the community, opening up his wallet to help others in need.

On the field, Watson has been nothing short of brilliant since replacing Tom Savage in Week 1. In six games (five of which he’s started), Watson has completed 61.5 percent of his passes for 1,297 yards with 15 touchdowns and five interceptions. He’s also rushed for 202 yards and two touchdowns and has kept many plays alive with his feet as he keeps his eyes downfield looking for open receivers.

Recently, DeAndre Hopkins lofted some very high praise Watson’s way, noting the team always has a chance to win with him under center.

The Texans are 3-3 heading into Week 8 and a date with the Seattle Seahawks. The young quarterback will absolutely be tested to the max against the famed Legion of Boom defense up there in Seattle.