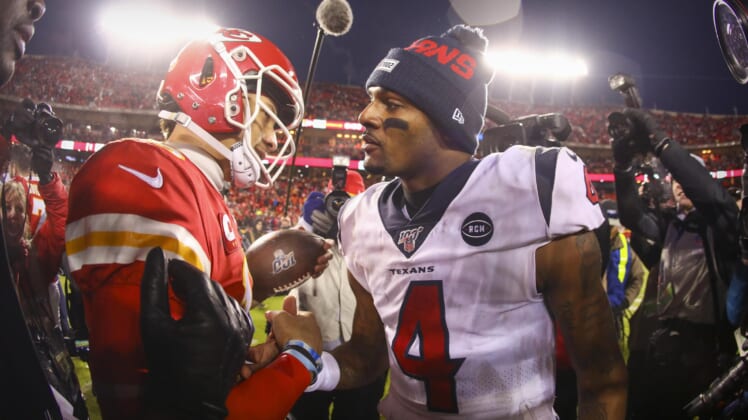 Now that Kansas City Chiefs quarterback Patrick Mahomes has completely reset the market, it stands to reason that the Houston Texans would really start to engage in extension negotiations with Deshaun Watson.

Members of the same 2017 draft class, Watson and Mahomes are pretty much tied at the hip. Though, the former is unlikely to receive a deal that tops the $500-plus million Mahomes could earn on his extension.

Houston Texans head coach and general manager Bill O’Brien was asked about Watson’s contract status by the media on Friday.

That’s pretty much a company line response more than anything. The embattled O’Brien knows full well that Houston must extend Watson here in the near future. As the quarterback market continues to reset itself on a near never-ending loop, Watson’s contract value will continue to go up.

Mahomes’ contract called for $450 million over 10 years. It includes $63.08 million guaranteed at signing and $141.4 million in total guarantees. All of these numbers are new high-water marks for a player in NFL history.

It was previously reported that Watson was looking at $40-plus million annually on an extension. The two sides have been engaged in talks since Houston’s season came to an ugly conclusion against the above-mentioned Chiefs in the playoffs.

As to where Mahomes signed a 10-year deal, other quarterbacks are pushing for shorter-term contracts. That’s why Watson’s extension is unlikely to look anything like what we’ve seen from the reigning Super Bowl MVP.

Either way, Houston must get something done here in short order. If this plays out until following the 2020 season, things will get ugly behind the scenes. That’s for sure. At the very least, Watson’s asking price will increase should he put together another banner season for Houston.