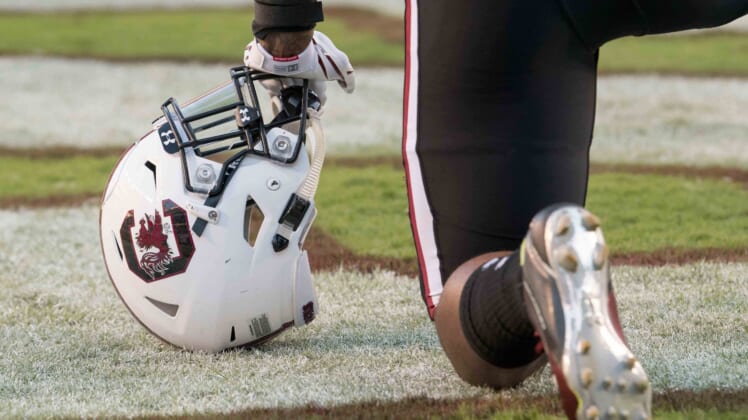 College football recruiting can be a bit ridiculous sometimes, like when programs offer middle-school kids. On that note, Tevin Carter announced he’s received an offer from South Carolina already, and he’s just in eighth grade.

Carter is already 6-foot-3, and though he’s just in eighth grade he’s already started most of the games last season for Freedom Prep Academy in Memphis, Tenn. Yes, that’s a high school team he’s been leading, and per Ben Breiner of The State he racked up roughly 1,500 yards combined throwing and running.

Per the report, South Carolina discovered Carter because the program is recruiting a teammate of his — Chris Morris, a 6-foot-4, 275-pound offensive tackle with offers from Alabama, Florida, Florida State, Georgia and Oklahoma.

His high school coach, Jerald Cook, said he thinks Carter is the first eighth-grader from Memphis to ever receive a scholarship offer this young.

“It’s very cool,” Cook said. “He’s probably the only kid in Memphis in eighth grade to be offered a scholarship. It’s never happened in Memphis since I’ve been here. It’s been crazy. He’s been getting a lot of buzz, a lot of attention and he’s all worthy of it.”

Chances are, South Carolina won’t be the last major Division I program to offer Carter a scholarship. If he’s as good as advertised, he’ll be able to play wherever he wants when he’s finished with high school, which is a handful of years away.