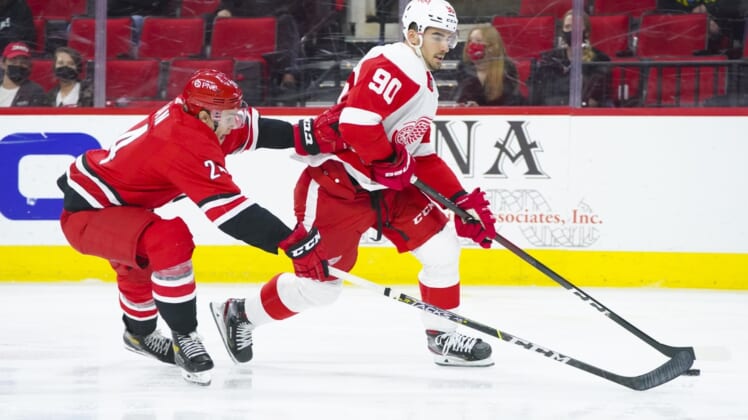 Teuvo Teravainen had a goal and an assist in just his second game back following a lengthy injury-related absence as the Carolina Hurricanes topped the visiting Detroit Red Wings 3-1 on Thursday night in Raleigh, N.C.

The Hurricanes (33-10-7, 73 points), playing at home for the first time since clinching a playoff spot earlier in the week, extended their points streak to nine games (6-0-3).

Goalie James Reimer made 16 saves for the Hurricanes. Reimer, appearing in only his fourth game of the month as the team is working in three goalies, hadn’t posted a victory since April 1. He has a team-high 15 wins.

It was the 200th regular-season game as head coach for Carolina’s Rod Brind’Amour, who holds a 117-64-19 record in those games.

Teravainen, a left winger, had played in only one of 33 games before making it back for Tuesday night’s game at Dallas. His goal was the team’s third of the game and came with 10:12 remaining, giving him 300 career NHL points.

Skjei, who sat out the previous four games with a concussion, showed patience after taking a pass from Aho before unleashing a shot as he approached the slot to open the scoring in the second period.

The second goal came after Troy Stecher’s turnover. Carolina’s Brett Pesce recovered the puck and Foegele converted from in front of the net.

A Hurricanes turnover in its zone led to Detroit’s second-period work, with Vrana doing the nifty stick work to send the puck past Reimer.

The teams combined for only 14 shots on goal in a scoreless first period.