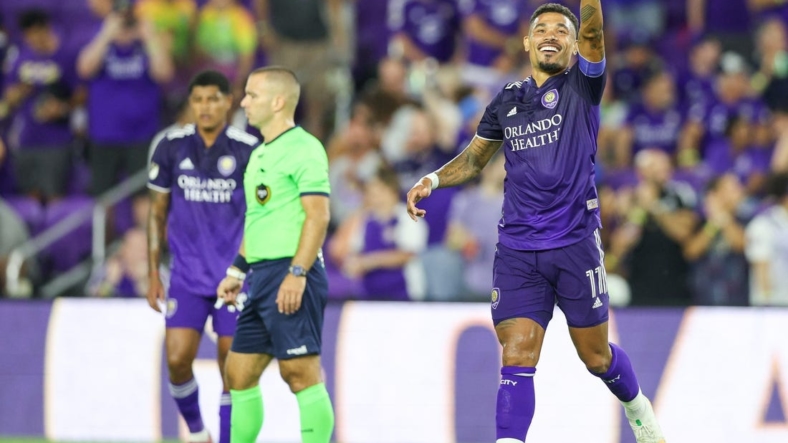 Substitute Tesho Akindele headed in a corner kick in the sixth minute of second-half stoppage time to lift Orlando City to a 2-1 victory over visiting New York City FC on Sunday night.

Akindele’s second late game-winner in as many matches lifted Orlando (11-10-6, 39 points) to a third straight victory on a night in which they outshot NYCFC 17-5, but at times struggled to pressure goalkeeper Sean Johnson.

Junior Urso also scored early for the host Lions, who remain fifth in the Eastern Conference, but now have a four-point cushion above the playoff line in the fight for seven postseason places.

Orlando nearly went down a man shortly after halftime when Antonio Carlos initially received a red card from referee Chris Penso for stomping on the ankle of NYCFC’s Nicolas Acevedo. But Penso downgraded it to a yellow following a video review.

Maxi Moralez leveled the match early in the second half for NYCFC (13-8-6, 45 points), who once led the East but have now lost four of five to drop to third and only a point above the fourth-place New York Red Bulls.

NYCFC failed to force Orlando’s Pedro Gallese into a single save as they continue to struggle following the summer departure of 13-goal scorer Valentin Castellanos to Girona of La Liga in Spain.

Akindele also came off the bench and scored in the 89th minute of Orlando’s 2-1 win at Charlotte FC last Sunday for his first goal of a frustrating season.

This time the striker’s decider came even later, at a time when New York looked to be comfortably holding on for a point.

Instead, Ivan Angulo curled an inswinging corner from the left, and Akindele simply outmuscled his marker to reach it about six yards away from the near post and send a glancing header past Johnson and into the right corner.

Urso opened the scoring in the seventh minute when he received a throw-in, spun his defender, played a slick give-and-go with Facundo Torres to get into the right side of the penalty area and then smashed a half-volley past Johnson from about eight yards out.

Moralez leveled the match eight minutes after halftime on a transition opportunity created by pressure from Talles Magno and a perfect throughball from Thiago Andrade.